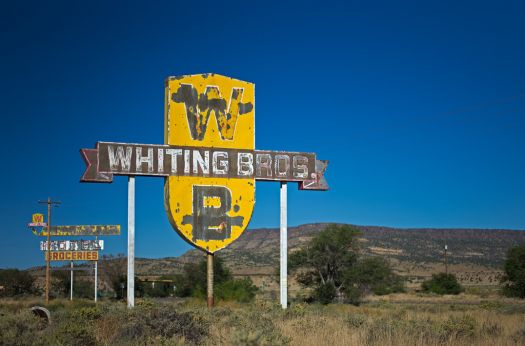 Yup. I was telling myself that as I was typing, bsimons. :-D

Its hard to get anyone to do anything once they've gone out of business.

Doesn't it seem like the Whiting Bros. should have been responsible for removing their signs? Be a lot nicer view without them.

Too bad for them. Looks like nice country with great open views. But that describes most of the southwestern US now, doesn't it? Tsk...

Hi, bsimons. I posted another puzzle of a failed New Mexico business a while back, and that's the reason we came up. Now we have a person who would know confirming our guess. They were built to appeal to people traveling by to begin with, and there just isn't enough local population to keep them going when those travelers have another faster route . Thanks for stopping to leave your comment, bsimons. :-)

We get this a lot out west. They build a major highway off the main rd & business dies if its not right on the highway.

I guess a combination of target practice and time, Leanne.

Well that's a bit of an eyesore. I wonder if it has been used for target practice.