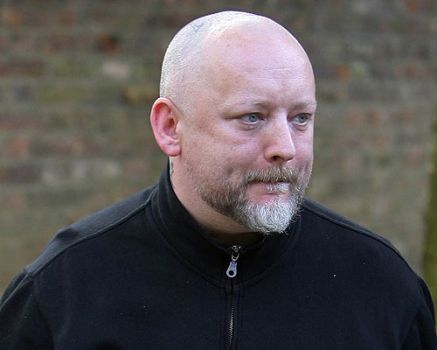 Oh my! What a change has occurred over the years! Glad he's healthier now and 'still out there'. Thanks for that link. I like this one, too: https://www.youtube.com/watch?v=JmcA9LIIXWw

woo hoo Squishy, you got a tenner :)

To be fair, I've heard him interviewed on the radio recently and he is entertaining, well informed and still has a good voice...and he's lived a bit

... and apparently he's much healthier these days, so that's nice!

He's quite a popular character here, despite his chequered past!!
I always liked his voice - but it's much deeper these days.

I guess the guy has been through a lot. Good for him that he's still standing.

This photo, allegedly, was taken as he left prison.

Woah! Congrats, TTK! Brilliant one, squishy. I knew he looked different these days but this photo was really challenging (the goatee).

I agree with MrD. What happened to him!!

Well done, TTK. You are a legend. Thanks for putting me out of my misery - I was almost there. Just didn't recognise him without all the make-up.

Just posted a jigsaw of Culture Club - no wonder you didn't recognise him!!

Boy George (born George Alan O'Dowd; 14 June 1961) is an English singer-songwriter, who was part of the English New Romantic movement which emerged in the late 1970s to the early 1980s. His music is often classified as blue-eyed soul, which is influenced by rhythm and blues and reggae. His 1990s and 2000s-era solo music has glam influences, such as David Bowie and Iggy Pop.
During the 1980s, Boy George was the lead singer of the Grammy and Brit Award winning pop band Culture Club where he became known for his soulful voice and androgynous appearance. He also founded and was lead singer of Jesus Loves You during the period 1989–1992. Being involved in many activities (among them songwriting, DJing, writing books, designing clothes and photography), he has released fewer music recordings in the last decade.

Here's one of my favourites

TTK swoops in for a win!!! Congratulations TTK - it is Boy George. Woop woop!

Is it Boy George/

nearly Neville...but not him ....but the same first name

The band is still performing, but had their most successful years in the 80's.

Not that fellow who they caught out in a toilet. I'll never forget "what's his name".

I don't think many girls thought that, glgl.

Hello, all. Not sure who he is, but I get the impression he was considered a heart throb in his heyday. Like many of us.

he thought people might hurt him and make him cry

He used to be the lead singer in a band.

Not Tommy, Neville. He's quite a bit younger than Tommy.

So, squishy, this fellow may be linked to the famous Cardinal Sin? Sorry, just trying to keep up with MisterDon here. Let's try and be a bit more sirryass.

thanks Neville but I was working off your clue :)

I agree with Neville!!

I don't think he would be welcomed in that role!!

Good morning squishy, and all DYR fans. Could this be our next Pope? Sorry at my poor attempt at humour. But if one hasn't got a clue, one must resort to other means.