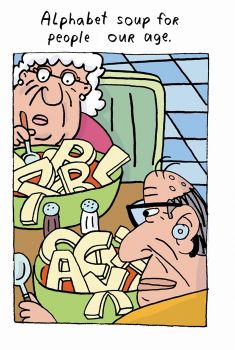 Which Beatles song contains the line: "When I was younger, so much younger than today"?
Created by Stillmanic Published 12 September 2019

That was only yesterday Max, I swore it was last Christmas.

I don't know any of their songs really but thought it could have been "Yesterday" which may not even be one of theirs. LOL

Got to dash and run - grocery shopping. Se ya later :))

Help! is the fifth studio album by English rock band the Beatles and the soundtrack from their film Help!. It was released on 6 August 1965. Produced by George Martin, it was the fifth UK album release by the band, and contains fourteen songs in its original British form. Seven of these, including the singles "Help!" and "Ticket to Ride", appeared in the film and took up the first side of the vinyl album. The second side contained seven other releases including the most-covered song ever written, "Yesterday".
The American release was a true soundtrack album, mixing the first seven songs with instrumental material from the film. Of the other seven songs that were on the British release, two were released on the US version of the next Beatles album, Rubber Soul, two were back-to-back on the next US single and then appeared on Yesterday and Today, and three had already been on Beatles VI.
Help! was nominated in the category of Album of the Year at the 1966 Grammys Awards, marking the first time that a rock band had been recognised in this category. In 2012, it was ranked 331st on Rolling Stone magazine's list of the "500 Greatest Albums of All Time". In September 2013, after the British Phonographic Industry changed its sales award rules, the album was certified platinum for recorded sales since 1994.
"Help!" the single is a song by the English rock band the Beatles that served as the title song for the 1965 film and its soundtrack album. It was released as a single in July 1965, and was number one for three weeks in the United States and the United Kingdom.
Credited to Lennon–McCartney, "Help!" was written by John Lennon with some assistance from Paul McCartney. During an interview with Playboy in 1980, Lennon recounted: "The whole Beatles thing was just beyond comprehension. I was subconsciously crying out for help".
It was ranked at number 29 on Rolling Stone's 500 Greatest Songs of All Time.

Just because you can move faster than I, hippo, do not think I will not get there.

Or would you prefer the other way around. Somehow I still think I'll be in Scotland afore ye...

Dis course, dat course, in the long run, does it really matter?

This 'discourse' has been so funny :))

What? No tomato sauce?

What's alphabet soup made of? Consonants and vowels, silly!

I believe the answer to the equation is

Percy Sledge is a Hammer. Thus--

I have a possible title in mind. Thanks, Bonnie.

I think that = Sledge (Hammers Sister).

I suppose 'Hammer' could be a constant. Lots of formulas have them.

Are you say you were not a fan of MC Hammer?

That is a scary thought Max. If Bonnie is correct,

He had already made his millions by the time he wrote that Max!

Simple, he was awake at that time.

Sir Paul claims to have written this song (both the words and the melody) based upon a dream he had. He said it was the easiest song he ever wrote.

So explain to me how this very same musical genius wrote the song 'Wonderful Christmastime'...

Hi hippo, thank you for that, helps with my self assurance, much appreciated. Fay.

I thought you were always younger. You look so young or is that an old picture of you, ms?

This never happened before today, you know, when I was younger.

No worries, we'll assist you in getting your feet back on the ground!

I can use a little cheering up. I'm feeling down today.

Alphabet soup? Why would you think that??

Gosh, that's a lot of constraints.

hippo, have you been eating alphabet soup today?

Hey Jude, buck up. There is always tomorrow.

@msbonne you obviously asked for the wrong assistants.

You are right that C is the Correct answer (always provided the question is framed Credibly and Convincingly, and not Amiss, Badly, Disingenuously, Erroneously or Falsly).

Suddenly, I'm not half the man I used to be.

Yesterday is not the answer and not the one, where he`s knocking the door in the middle of the night. But the name of the song would fit in here as well.

Not from just anybody?

I know this beatles song. For once I don't need any assistance for a popular music question...

My mother always carefully selected the letters. The always spelt the same thing - Go Away.

My mother used to feed me alphabet soup when I was young - until I figured out she was just trying to put words in my mouth.

I'll know the answer tomorrow. (He he he)

I figured that would be fine, they could tell me the future.

c) is not a toll free number; it's the profit hotline.

I would, but I cannot remember the number. I tried dialing C, but the nice recorded lady tells me I need more than that.

Did you call the assistance hotline?

I may require some assistance with this one. I am quite certain the answer is C, but still...…..


I do hope if Garry was amongst the best and brightest at that firm, that it has been disbanded and is now officially prohibited from reuniting.

I love soup.
I am lucky I can still read letters in t he soup that are a bit smaller - which makes the soup easier to cook!

Another Darwin award….
Police said a lawyer demonstrating the safety of windows in a downtown Toronto skyscraper crashed through a pane of glass with his shoulder and plunged twenty-four floors to his death. A police spokesman said Garry, thirty-nine, fell into the courtyard of the Toronto Dominion Bank Tower as he was explaining the strength of the building's windows to visiting law students. Garry had previously conducted the demonstration of window strength without mishap, according to police reports. The managing partner of the law firm that employed the deceased told the Toronto Sun newspaper that Garry was "one of the best and brightest" members of the two-hundred-man association.