as promised for bluebird42 - more fungus 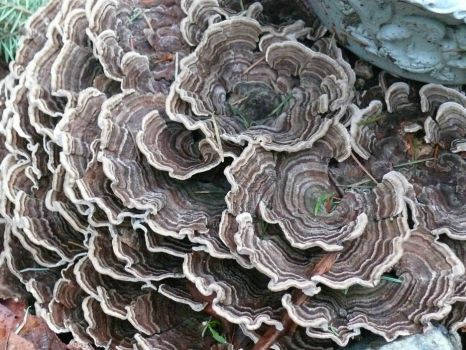 Love the texture! If you didn't know better you could see ruffled velvet.

I am sorry this beautiful fungi dried out. It's heartwarming to see so many comments from folk who care about natures unusual growths . Thanks again jyl. Fay.

Isn't it amazing what we can learn on Jigidi? This beauty covered the top of a stump (only about 5 cm tall and 40 cm across) at the end of my driveway. It never did recover from being dried out, which is surprizing because the climate here is "wet coast" of N America, bottom SW corner of British Columbia, Canada.

Beautiful, I would love it in my back yard too. I know it's a fungi but wouldn't have thought it a mushroom. Thanks for enlightening me .

Thanks, FMM! Unfortunately, we had a summer drought that dried it up so badly it may not recover.

Thank you, Don! I'm honored by your interest and comment.

This is really something, and it makes a great photograph! Nicely done.

Latifa, it relates to the comment on another puzzle about lilac bushes. (Sorry!)

Thanks latifa. At least the stupid former neighbor didn't tear it out, too.

I love this photo! How lucky that you have it at the corner of your driveway. I look forward to solving more of your puzzles - thanks!

Sorry this reply is so late, Floyd; I've been otherwise occupied. I haven't given it a good look for a while; maybe it's grown? If so, I'll find the time to shoot it and post a new pic. Thanks for commenting.

Thank you so much megabelle2000! What a wonderful combination of classical music and beautiful flowers. You've given me a precious break from typing up meeting notes. ☺

Thank you! Will do.

You have my permission, bluebird. Is there any way I can make it more "printable," maybe by attaching it to an email? Put a note with your email address on one of my older posts and I'll be happy to attach it to a reply, if you choose to.
You just poked me (in a good way) and now I'll have to try it in coloured pencil. Have fun! ☺

Ok, I want to draw it in ink, then watercolor it. Actually I want to draw and paint the idea of it more than it specifically. Been looking for my next drawing for about a week now and you found it. Unlike the bird and squirrel paintings I've done of a few Jigadeers photos, this one will be more abstracted than the original. Still, with your permission, I'd like to play with it. May I?

Thanks for getting here - after all, it was an invitation not a command. Glad you like it. Now I've seen one or two others in the neighborhood, so I'll be more aware of what's going on around here. I think the snowdrops might be next. Some are in bloom right now, weeks early.
BTW I love your new avatar, it's so much more appealing than the last one. ☺

BEAUTIFUL! Thanks so much Jyl! That's a really impressive one! (took me long enough to get over here -- been a bit of a rushed week.

Thanks for stopping by, megabelle. Now that you've mentioned it, I'll have to take a look at this little display when it stops raining today.

Thanks, schutkleur. It's interesting how plants get common names that are either very different or very similar from language to language. This one seems simple to figure out, since turkeys are North American birds. I like the name fairy benches, though.

☺☺☺ By the way : we call them "elfenbankjes" , which translates into "fairy benches" ☺

Thanks, schutkleur. I'll leave them alone. ☺☺

Thanks RaynaGrace. I didn't even notice it until after the little ones we posted from Cedar Hill.
Thanks schutkleur; it's interesting to know the name of the little "thing" at the corner of my driveway. Should I be telling the local universities about it in case they should collect parts of it?

That's a beautiful Turkey Tail (trametes versicolor, or polyporus versicolor). And a big one!!
It got it's common name by resembling the tail of a wild turkey.
Substances derived from parts of this mushroom may be useful against cancer.

Wow! Never saw one like this. Love the multiple layers. Great shot. Thanks for sharing.

Thank you, Lunie and KatieK. I fully agree with your comments. I'll keep an eye on this one to see how it changes. If it gets more interesting, I'll be sure to share it. We have lots of deer and other critters in the area, but it seems that none of them have been nibbling.

Very beautiful mushrooms (as many are).

Thanks, songbirdj. I took this this morning just as the rain started, so the colour wasn't quite as bright as in sunshine. The little Douglas Fir sprig in the background was deliberately included to show how big this sucker is.

Wow, who would have thought fungus could be beautiful?