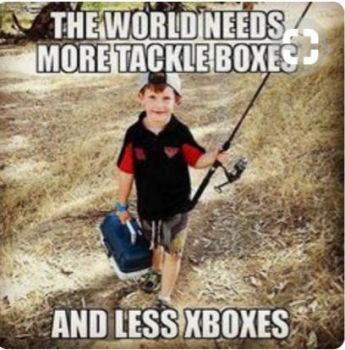 Created by mycat Published 8 October 2017
Why this advertisement?

Yes! Brie, my husband and I have been noticing this a lot. Even when they're out to eat. The kids sit and eat while mom ignores them and is on her phone. Pay some attention to your kids! They're starving for it.

We used to play out too. There would always be a group, especially in the evening and when one or two went in, so did the rest. What saddens me also is not just kids with mobiles stuck to their ears or being stared at while they are texting - it's the parents, particularly young mothers, who are pushing their overweight children in a buggy while they are on the phone or texting. They never speak to their children.

We did too. We were within a block or two and when mom called we could hear her. Of course we all had watches, could tell time and knew to be home by 6 as that's when we ate. Or whenever the streetlights went on. I know there are a lot of creeps out there that sometimes make it impossible to let them out to play, but jntleman had a good idea about parents going out with them. You spend time together outside, and then when you have to get work done in the house, they help you work.

I agree, parents this day and time don't compare to the folks back then. And most kids have a cell phone stuck to the side of their face. We always played outside and had to be told to come in.

Agree with this sentiment 100%!

Brie1648, you said it all right there! The parents couldn't stand it. The parents are using the TV for a babysitter.

I really don't like wasting my time sitting in front of a television. My friends had a bet with their children that they could not live with no TV for a week. By the second day they were so tired of their perpetual chatter they gave them the money and back on went the TV!
My parents didn't have a TV until we were almost in double figures. We were only allowed to watch Children's Hour which was usually very 'cultured'. We read. My parents would sit and read to us or would read too. How many modern parents do that with their children. I am glad I was a child 60+ years ago.

The parents should turn off the TV and go out with them. When you get off the TV you'll find a whole new world out there. I decided 20 years ago that I didn't need one. Ahhhh - so quiet!

So many parents these days would rather their child be inside playing games because when outside, they don't have an eye on them. Back in my day, Mom would call and call so we could go in to eat. If it wasn't a school night, we were allowed back out until dark.....Good old days

And in the mean time, we'll sit here and tell them to go outside and play! Electronics will be the downfall of the world for Everyone! No one has any social skills anymore.

Brie,
That really bothers me. Study after study have shown these kids need human interaction, free play and very limited electronics, but many parents don't listen.

Too right! Last year my friend brought her 7 and 9 year old sons to stay and we spent three days on the beach making sandcastles - and they loved it!
My neighbour has two boys, think they are 4 and 6. They were both sat on the grass - with an iPad each. So sad.

I agree! Get those kids outside and off the electronics. They're ruining them.