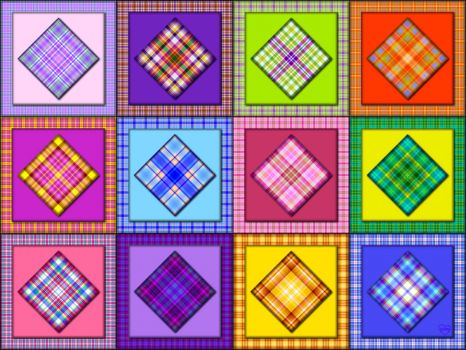 I made this puzzle from scratch. I absolutely love making my puzzles, and I hope you love solving them. (❛ᴗ❛)
Created by RandomWorship Published 16 January 2016

Image copyright: © RandomWorship. My permission is required to use, pin or re-post this image.

Hee, hee. Wallyette. That's so funny. Thanks Sally! And thanks for not being offended by my silly typo!! So glad you're going to keep me. Whew! (❛ᴗ❛)

Glad you're having fun with this one, Chrissie. Thanks! And hope you're flying off to something fun!! (❛ᴗ❛)

Tainted? TAINTED?? That is definitely NOT what I meant to say. Make that TALENTED, people. Do you hear me? TALENTED!!!! Damn my terrible typing skills. *hangs head in shame* Sowwy Sally. ❤❤❤

Getting to the bookmarks. As I thought on the first one, this un's great too :-)

Tainted? Ditto is tainted? You never told me!

Just kidding but what a great tpyo :-))

Herself is still laughing!

Indeed you can, Sally! I think I'll send you some fabric samples too, 'cos I think a tainted person like yourself could make alls sorts of wonderful things out of them. And if not, I think they would make okay paint rags too. LOL So glad you like this one, Sally! Big smiles here!! (❛ᴗ❛)

Feel free to have as many faves as you want, Ardy!!And I hope you sleep better tonight than last too. When you're not well, the body needs more rest. And could you order groceries on-line and have them delivered? I hope so. Going out when you're not feeling well isn't good either. Take care, and recover quickly! Healing ((HUGS))

Get out, Stephanie!! My sister lives in Brunswick. And I'm out in the green belt, outer north east. About 30 minutes from you. Which she claims to be "out in the country", but that's just because she's such an inner city gal. And has all but forgotten her roots of growing up out here. And it DOES seem like a small world on the 'net - even though we can more easily access more of the world than ever before!! It's lovely to "meet you". And I'll do you a deal. I'll keep making 'em, if you keep solving 'em. LOL!! (❛ᴗ❛)

PS. Your cat is beautiful!

Fancy Schmancy indeed... I'll take a dozen of each and could I have a colour coordinated T-Shirt with pocket to put them in please.... This way I'll have a great head start on Christmas...RW Enterprises is on a roll.... Thanks, Kirsten, so much for the delightful puzzle.... ｡◕‿◕｡❤｡◕‿◕｡

I still like the three first ones but am adding the plaid in the top row second from left. Really like that one here. Thanks. I hope tonight is less interrupted than last night. Fluffy discovered I was up and came in and stayed for about half an hour and then wanted out. Hope I feel like going out tomorrow. The milk is getting low. The grocery is a few blocks up the street ((HUGS))

Thanks Kirsten......I'm actually in Brunswick, Melbourne! The world seems to be made very small on the net! Keep up the great work.....love your puzzles!

Isn't it funny how we solve different sizes in different ways? And I'm glad you're having fun with this one, Sheena. (❛ᴗ❛)

Lovely, built all the edges and saved the centres til last (*~*)

Awww. Thanks Nadine! I'm so glad you like it! And well done you. I see you perched on the leaderboard. You clearly whipped these trickise hankies into shape! (❛ᴗ❛)

From one Aussie to another, you're most welcome Stephanie!! (❛ᴗ❛)

......and way too pretty to sneeze on. Thanks Kirsten I enjoyed this puzzle enormously. I found it tricky - not hard - but it had me going in all directions and counting to nine a lot, hahahaha. Now I'm going to see if I can make that board. It may take a while.....♥