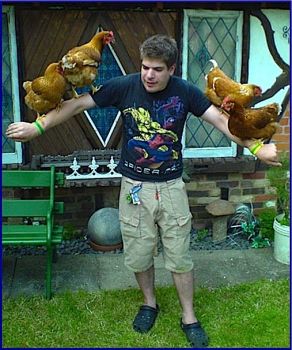 Created by JiggyBelleS Published 1 November 2012
Why this advertisement?

These may be late, but they were very funny! Thanks so much Negated contempt. Your captions add a lot to the game! Thank you!

Ben's new prosthetic arms allowed him to be the chicken farmer he'd always wanted to be. Up till recently he was "no arms, no fowl".

There was no denying it. Jim was becoming quite the chick magnet.

Thank you Rebecca! This guy looks like a guy who would be telling stories to chickens. What a clever caption for this photo!! ROFL

His charges listened in rapt attention while Dan told the story of the wild chickens in the olden days, who roosted in trees at night...

What Hen-ry always wanted were Carrier Pigeons, as a hobby, and send notes to his friends as a novelty. But Hen-ry lived way out in the country, and all he had at his disposal were his fine feathered friends....the chickens. He did the best he could, training didn't go well. The chickens couldn't quite get the hang of flying any distance, till one day is desperation Hen-ry yelled,"FLY OR FRY!" Need I say more? Supper's at 6:30.

I'm still not sure what the heck this guy is doing. But, you all sure had a lot of very funny ideas! Thanks to all of you for some hilarious captions!!!

Back! Back!, he cried, but the advance wave of the Flying Chicken Corps was upon him. Next he would be strafed by Rooster Squadron swiftly followed by the heavy fire power of Pullet Patrol. He was under attack from Fowl Pest.

Reaching an impasse at Harold's head the chickens were unsure how they would get "to the other side."

Marvin had to prove he wasn't henpecked.

The girls were trying to teach him the chicken dance, but so far he just wasn't getting it.