They just told us one of us has to go... 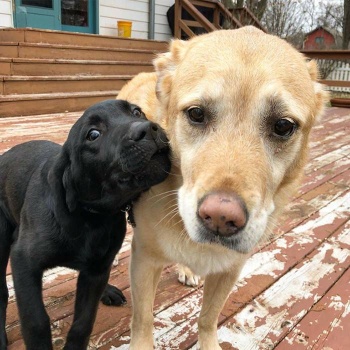 Created by marion196 Published 28 June 2022
Why this advertisement?

@KittyCounselor That's absolutely unconscionable. Some people think animals are like toys. That they exist only for our amusement, with no life or feelings worth considering. I'm with you re preferring animals over humans. :'-(

So sorry for both of you.

I agree with everything you said, @marion196.

@gemstone...Yes, this is just a caption I put on this photo because it looks like the little black dog is explaining why the older dog looks so sad. All I do is get photos off the web of animals with expressions on their sweet faces, and I make a caption that says what they're thinking or saying. But, I also know there's a lot of cruelty out there for animals, too, which breaks my heart. Many times, I've told people that I'd rather work with animals than humans. They are who they are...honest...you can't help but love them because they ARE so honest, right? But, they also have feelings (even though I've had people tell me animals don't have feelings like humans...BAH HUMBUG to that! They probably have MORE emotions than humans! Enough said, huh? Sorry about rambling on like this...

I'm with you, @Sana_M . When I was doing rescue in TX, I came across a woman who would adopt a kitten from the shelter. When it got to be 6 years old, she'd dump it and at the shelter and get another kitten. I didn't understand why anyone who give her a kitten but, apparently, she got away with it for a while. I banned her from adopting from my group. The other thing that ticks me off big time. A woman called me and wanted me to take her two elderly cats that she'd had since they were kittens. She was moving from her house to a condo that didn't allow pets. I told her no and asked her how she could do that. I said it would be close to impossible to adopt out two old cats and it would be very hard on them too. I suggested she try to place them with family or friends. She called me every awful thing in the book. Why would you move to a place where you can't take your pets? It's a good thing she never had kids.

I'm just glad that this Marion's caption and probably not true.

@KittyCounselor My husband and I have adopted rescue cats for 40+ years. And this breaks my heart. We would never dump any of our cats. If we were told one had to go, then we would move. :'-(

I hope that's not true, but having been a rescuer, I know that, if anyone gets dumped, it's the older one. Or if it's between a cat and a dog, the cat gets dumped. There's a reason I like animals more than humans.