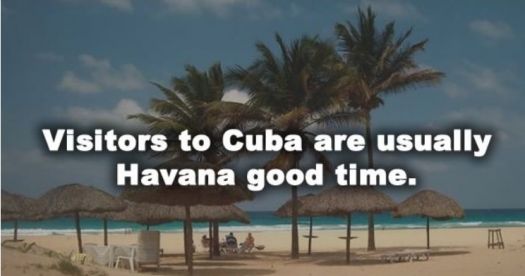 The book 'Our Man in Havana' is by which author?
Created by Stillmanic Published 22 August 2019

I tried reading one of his books BB and just couldn't get into it. There is another author, Ian Banks. His books go 'whoosh' from page one.

I think he Beaton Cecil.

You should have lived under his rule if you think the book was tough.

I didn't know this one and after reading your synopsis I doubt I would have been able to finish the book, sounds soooo confusing.

Our Man In Havana (1958) is a novel set in Cuba by the British author Graham Greene. He makes fun of intelligence services, especially the British MI6, and their willingness to believe reports from their local informants. The book predates the Cuban Missile Crisis, but certain aspects of the plot, notably the role of missile installations, appear to anticipate the events of 1962.
It was adapted into a film of the same name in 1959, directed by Carol Reed and starring Alec Guinness. In 1963 it was adapted into an opera by Malcolm Williamson, to a libretto by Sidney Gilliat, who had worked on the film. In 2007, it was adapted into a play by Clive Francis, which has since toured the UK several times and been performed in various parts of the world.
The novel, a black comedy, is set in Havana during the Fulgencio Batista regime. James Wormold, a vacuum cleaner retailer, is approached by Hawthorne, who tries to recruit him for the Secret Intelligence Service (MI6). Wormold's wife had left him and now, he lives with his 16-year-old beautiful, devoutly Catholic but materialistic and manipulative daughter Milly. Since Wormold does not make enough money to pay for Milly's extravagances, he accepts the offer of a side job in espionage. Because he has no information to send to London, Wormold fabricates his reports using information found in newspapers and invents a fictitious network of agents. Some of the names in his network are those of real people (most of whom he has never met), but some are made up. Wormold tells only his friend and World War I veteran, Dr. Hasselbacher, about his spy work, hiding the truth from Milly.
At one point, he decides to make his reports "exciting" by sending to London sketches of what he describes as a secret military installation in the mountains, actually vacuum cleaner parts scaled to a large size. In London, nobody except Hawthorne, the only one to know that Wormold sells vacuum cleaners, doubts this report. However, Hawthorne keeps quiet for fear of losing his job. In the light of the new developments, London sends Wormold a secretary, Beatrice Severn, and a radio assistant codenamed "C" with much spy paraphernalia.
On arriving, Beatrice tells Wormold she has orders to take over his contacts. Her first request is to contact the pilot Raúl. Under pressure, Wormold develops an elaborate plan for his fictitious agent "Raúl". However, to his surprise, a real person with the same name is killed in an apparent car accident. From then on, Wormold's manufactured universe overlaps with reality, with threats made to his "contacts". Together, Beatrice, who still believes the contacts to be real, and Wormold try to save the real people who share names with his fictional agents.
Meanwhile, London passes on the information that an unspecified enemy, implied to be a Soviet contact, intends to poison Wormold at a trade association luncheon, where he is the speaker. It would seem that his information has worried local operatives who now seek to remove him. London is pleased by this, as that validates his work. Wormold goes to the function and sees Dr. Hasselbacher, who loudly warns him of the threat. Wormold continues to dinner where he manages to refuse the meal that is offered and eats another one. Across the table sits a fellow vacuum cleaner salesman he had met earlier, Carter, who offers him whisky. Suspicious, Wormold knocks over the glass, which is then drunk by the headwaiter's dachshund, which soon dies. In retaliation for the failure, Carter kills Dr. Hasselbacher at the club bar.
Captain Segura, a military strongman in love with Milly and intending to marry her, has a list of all of the spies in Havana, which Wormold would like to send to London to partially redeem his employment. He tells Segura that he is going to his house to discuss Segura's plans about Milly. Once there, Wormold proposes they play a game of draughts using miniature bottles of Scotch and Bourbon as the game pieces, where each piece taken has to be drunk at once. Eventually, Segura, who is a much better player, ends up drunk and falls asleep. Wormold takes his gun and photographs the list using a microdot camera. To avenge the murder of Dr. Hasselbacher, Wormold convinces Carter to accompany him on a drive and, at a local brothel and after some hesitation, shoots with Segura's pistol. He misses Carter and is about to leave. Carter shoots back, but Wormold shoots and kills him. Wormold sends the agent list as a microdot photograph on a postage stamp to London, but it proves blank when processed.
Wormold confesses everything to Beatrice, who reports him to London. Captain Segura has Wormold deported. Wormold and Beatrice are summoned to headquarters, where Beatrice is posted to Jakarta and Wormold's situation is considered. To avoid embarrassment and silence him from speaking to the press, MI6 offers Wormold a teaching post at headquarters and recommends him for the Order of the British Empire. Afterwards, Beatrice comes to Wormold's hotel, and they decide to marry. Milly is surprisingly accepting of their decision, and she is to go to a Swiss finishing school, paid for by Wormold's scam earnings.

One of my favorite songs.

Best time I ever had there was Thirteen Days in October...

(At the time, I could play 'Guantanamo-ra' on the guitar.)

Don't know answer but the puzzle is a real *groan* Thanks, Bonnie.

I thought you were supposed to drink Castro oil.

They make pills for that you know.

I think Max may be allergic to Cuba.

msbonne - I thought you and Max would be all over this one.

Never over look the handy use of a hammer.

He failed to remember that it is duct tape and wire that fixes all problems. LOL.. ;-))

Should have used Gorilla, or TRex tape.

Another Darwin award….
A misplaced faith in the miracle of duct tape led to the demise of a man boating on the Columbia River on Monday evening.
Duct tape has a reputation for fixing any problem. Steven and a friend were fishing in a 12-foot aluminium boat held together with multiple duct tape repairs, including the motor mount. Suddenly they encountered rough water and Steven stood up in the boat.
The vessel, rated to hold 200 pounds, capsized and tossed the two men and their 640 pounds of equipment into the water.
The US Coast Guard rescued the surviving companion on Tuesday morning, but Steven was not so lucky. He was found dead in an ill-fitting life jacket. Perhaps if he had duct taped it in place, he would still be sailing the river in his rickety dinghy, instead of holding a Darwin Award.