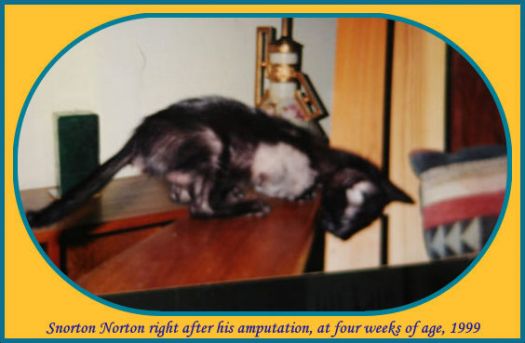 Created by octomom Published 4 November 2012
Why this advertisement?

Yes he did, Jenna. Thanks for your comment, and also that of jptigger. I appreciate your taking the time to let me know.

Poor little fella, landed on his 3 paws finding Octomom though.

Octomom, Good for you. He's adorable.

I suppose you could have named him "Stool".......but people might get the wrong impression.....

A great opportunity to show your little sweeties again! Thanks so much, Gail!!
:33

I used to have a three-legged cat that I called Tripod, back around 1990.

Ah! I missed this one my first go-round - now I know how he ended up as a tripod!!! I've heard of a 3 legged dog actually called Tripod:))))

Norton was born to a breeder who brought him into my friend's veterinary clinic to be euthanized. His mother had bitten his leg and it atrophied and was unusable. The breeder thought no one would want him. Feh! I had his leg amputated and brought him home. He looked like a cross between a bat, a rat, and a Chihuahua when he was a baby. He's my favorite of all the cats I've been owned by.