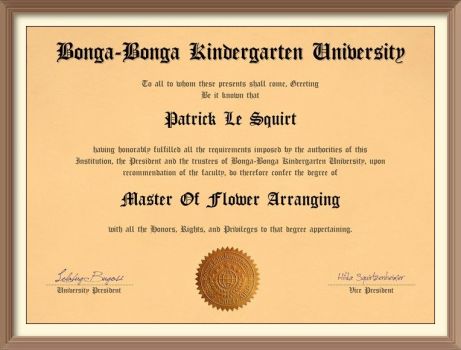 This "diploma" has recently come to my attention, and I feel it my duty to report it as a BLATANT FORGERY!!........
Let it be known that:-
1. The esteemed Bonga-Bonga Kindergarten University never has, never does, and never will issue a degree in flower arranging......
2. Though I presently am the present president of the university, I would NEVER sign my name as "Lelabug".......
3. I have never before heard of "Hilda Squirtzenheimer" - in fact the present vice president is presently Berenice Bluebottle, who happens to be presently present at my side........

To summarise, summarily.......I believe this audacious affront to be the work of someone who is jealous of my own achievements in the field of diplomas.....someone who has NO AUTHENTIC DIPLOMAS OF THEIR OWN........As such, I feel sadness and pity for that person, so I hereby decree that thy can KEEP THE DOGGONE DODGY DEGREE!
Created by lelabugosi Published 29 April 2014

Is it only possible to arrange and derange - I would like this arrangement to be re-arranged.. if arrangable of course.....

I think that has already been arranged...

If you don't like things too arranged, I can arrange that.

good, i don't like things to be too 'arranged'

An Unarranger of sorts, not to be confuzzled with the Rone Langer, who did don a mask although it wasn't Don's to give or so I was told. ah hem, ah, yes, no doubt Squirtzy is off with his mask to unarrange things a tad.

There must be an unscrupulously dastardly villain in the world, bent on re-arranging the arranged flowers!.....

Looks like another threat to the world has to be thwarted!

Hope it doesn't take more than a week or so. Good luck while I'm gone.

(Don't anybody do anything to Mt. Rushmore!)

So it is Juneee - have you seen it?? When they start getting legs they have got to retire.....

that will be Tadpole Vision

Dear sweet patsquire - you should hear them talk about the temperature of the water in different places of the pond and about how to take care of the dangers from the water tigers. And then of course about what was on TV last night.....

No argument from me Juneee. One day I drove past a cow pasture. Four cows were standing near the fence. They had their heads lowered and all four were touching foreheads together, with their tail ends pointing N, S, E and W. Just standing there, for all the world looking like they were communicating with ESP or brain waves or something. And who's to say they weren't?

but all animals communicate

Are you sure you're not just "hearing things" Hanne? Tadpoles? Maybe a little too much tadpole wine from time to time?

But it's NOT so, tadpoles talk very much together I've heard it several times when they thought I had left again......

HAHAHAHAHAHA! Nothing at all Gemmeeeee. Apprentice to a pilot, now that can be a problem. If you're hard of hearing you could end up being an apprentice to a pirate! (The Pirates of Penzance)

Long, long ago we debated whether tadpoles communicated or perhaps even had a language of their own, but that was such a silly concept! The only purpose tadpoles would have for language is to answer the question, "What do you want to be when you grow up?" and then they would ALL give the same two-word answer. And it isn't, "A pilot!”

familial dialect is most common... does that explain similarities? I think so. But in my 'family' I think we are all from different planets or maybe adopted, haven't figured that out yet. No one in my family speaks or even thinks I do, maybe they are embarrassed? hm? My son has a habit of saying to me from time to time " I don't know you.... " Makes me wonder.

The Bugosis may indeed speak with "a recognizable voice".....but that would be due to the fact that we think along the same crooked lines.........
As for Mr.Le Squirt's 2nd 3x removed cousin, I would go so far as to suggest that she DOESN'T EVEN EXIST!!......There, I've said it......

On the other hand when any one or another of the following Bugosilanders and/or Bonga-Bongans speaks WITH A RECOGNIZABLE VOICE, nobody breathes a word of suspicion about their origin or genesis:

It's definitely not your imagination! And the squirt doesn't know (or at least claims not to know) how to upload a profile photo (Octomom creates the one he uses), so the fact that the "cousin" has no photo is another indicator.......

Is it just my imagination, or is there is an amazing resemblance in the verbose elocution in the dictates between Mr. P Squire and his 2nd 3x removed cousin?

So Hasprzerl, take off you hoser!

Oh, were you talkin' to her? Sorry, I thought you meant me. Anyway, you can keep the
SMOOOCH!

Well hello again darlin.' It's been a while but let's see..............are you sure it wasn't in Burglary and Lock Picking class? I don't think it would have been in Flame Field Expedients class (home-made firebombs). Anyway, thank you for your kind consideration in drafting this daft diploma for me. It made my heart-thingy go pitter-patter, pitter-patter!

And now here's something for YOU!

I think not a low-life who has done this forgery deed but our own dear ''SLOG''!!! She has been complaining that things were much too quiet & boring so just had to do something to stir up some fun.

Could this be the work of a low life like Roger??
Only, I say ,, Only if there is some form of profit to be made, cash or a trade for better shiny objects and such.

Or the nasty little pervert!

If you need further guidance I will apply my prodigious brain to your internal problems, but you certainly ought to be capable of figuring out who among your minions would be of such low character as to sneak behind your back and do a naughty thing like this.

That is all for now.

Are you done Hasprzerl? Or must we hold our collective breath?

Hello you Bugosians. I heard my name and came to investigate. WELL! I find I've been dragged into this mess, and I find myself among this motley assortment of mixed low- and high-brow characters. WELL!

First let me clarify something. I am patsquire's SECOND cousin THRICE removed, not third cousin twice removed. He can never keep that (or anything else) straight in his mind.

Second, let me state forthwith that my last name is Barloff.

THAT'S RIGHT, BARLOFF!! B A R L O F F !!!!! I am Hasprzerl Barloff. So if anyone (such as my second cousin thrice removed) is casting any aspersions about the BARLOFFS, let him cast the first stone, as it were, or point the fickle finger of fate, or j'accuse, or something like that AT ME! If he dares!

HA! HA! I say, HA! Somebody within Lela Bugosi's own inner circle obviously forged this deceptively duplicitous diploma. Somebody whose ego could not let it out without appending the telltale copyright. And somebody who BELITTLES HIS MASTER BEHIND HIS BACK and signs his name "Lelabug" which lelabug himself declares he would NEVER DO! So who is this contemptuous, contemptible, devious deviate in the Bugosi camp? Who? Who?

That is all for now.

Yes, I must admit that "Flower Arranging" cannot in any way compare to the erudite profession of "Badass".........and this so-called "Diploma" isn't half as nice as my pretty, and AUTHENTIC DIPLOMA.......but then, beggars can't be choosers, can they?......

You could never have known the secret identity (in the secret world of secret agents) of my great-aunt Tilly, mother of my third cousin twice removed Hasprzerl, who uses the code name Hilda Squirtzenheimer when she's secretly out on a secret mission.

On the bright side, however, let us give thanks and state our relief that the degree is not in the area or field of Debate! Although I may be verbally verbose, I would not want to be labeled a Master of the Debate, or Master Debator! So I guess I'm lucky the "diploma forger" didn't go that route!

I wonder, does anybody know if the lowly cur, the flea-bitten one, the mangy mutt Dogdaze knows how to type?

No doubt, "Le Squirty-One" will try and make out that it is I who forged it, in order to give him the pleasure of actually having something to hang on the wall of his caravan........as if.......

Well, of course, it's a forged forgery....we know Mr.PSquirt to be old and hairy and the seal on this 'diploma' says 2014.....so BBKU is a brand new U and they would never let him near the school for fear of scaring the little ones.....

I smell something fishy or is it the flower arrangement?

All I know is that it wasn't me who forged the document or the signatures, lela b!!!