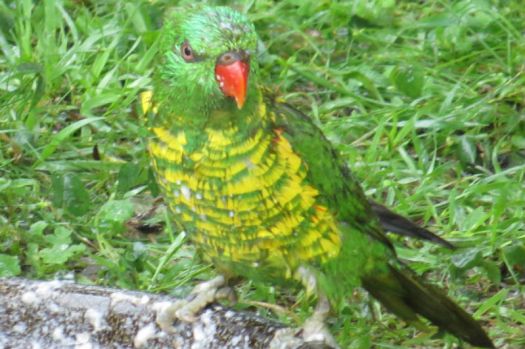 ...feeding in the rain! I waited for a lull in the downpour to put some food out for them, and all these drowned rats flew in!! The young Lorikeets haven't learned to 'lap' so this bird is covered in flicked pieces of food from the other juvenile birds!
We received 86mm - 3 1/4" - yesterday, and it was the last of the rain from ex-Cyclone Marcia! Our total rainfall in 48 hours was 247mm - 10" - so it's nice to have some sunshine today!!

Dang!!! You have had an awful lot of rain in a short amount of time!!! Sure hope you have not had problems with flooding.
Just LOVE the scaly breasted Lorikeet. The greens and yellows are amazing.

Thanks Florrie, Gracie and Lyndee:)))

He sure is camouflaged.

Wow! that was too much rain, I am glad you are having some sunshine today!

They sure were hungry Shirley:)) I'd love to know where they go during the heavy rain and windy weather though!! Thanks :))

Thanks Aggie - we rarely see them - just mainly the Rainbows:))

Thanks IF - when a couple find the food out - they screech and tell the others:))) Then it's madness:)))

Thanks Dave - they don't stay messy for long:))

My pleasure donnebrook - with their back turned it's really hard to see them:)) The feet are the usual parrot feet size - and not particularly big:))) Thanks :)))

Thanks for the photo. They blend in well with their environment. They really do have big feet!!

I agree with Shirley and Morris. Eat while you can and clean up later when dryer. Nice photo, Robyn!

Nice photo. I'm glad they know where to go for some food. :)

They must have missed a feed or two and were anxious to feed, they'll all be happy to be back to normal. Thanks, Rob.

Thanks Floyd, Barb and Cathy - they sure were hungry - and wet!!
We live in a hilly area Floyd - so were fine:)) Other areas weren't so lucky and had flooding.
This was the only Scaly we saw Barb - no parents around to mop up the mess!!
LOL! Cathy - they certainly know how to make a mess:)))

He's messy but beautiful !!!!
Maybe 'mom' should consider putting a bib on him before he eats.
: )))

Well, this drown rat will have a work on his hands, feet....or beak? Or maybe the parents will help the little guy....it is a good thing that they spend lots of time preening, he will need it and a lot of it....LOL

This poor guy looks a little lost.
I hope there wasn't too much flooding and that you survived OK.

That's how they get their name Jacki - the feathers are arranged like fish scales:))) This one has a bit more yellow showing than I've seen before though.Thanks :)))

I love the mottled green and yellow breast.

Fabulous photo thanks Rob and a great puzzle. The poor fellow will have to clean himself up! We don't have them here at all, they are more coastal birds, I think. So you've had 10 inches all up. That's a lot of rain. We have lovely sunshine here today too and it's very humid.
Thanks and hugs.

Definitely a wet bird!! But Rob....look how green everything (including the Lorikeet) is!!!!