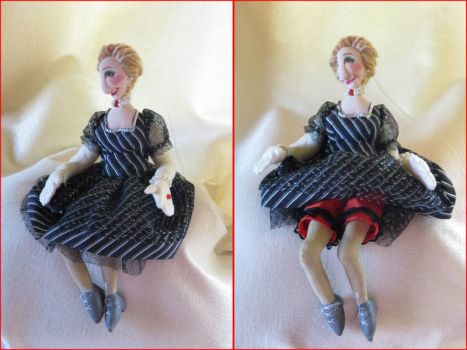 Another one of my hand-made dolls from quite a few years ago.
Created by robryan Published 15 January 2016

Ah! I see she's fooled you with her innocent expression Jacki!!! It's her simpering smile that does it!!! Thanks :))))

LOL, hasn't she got sass! Thanks for the smile Rob. You really get a lot of personality into your work.

she's beautifully done, but a little scary looking. thank you.

Thanks Barb, Lorna, Shirley, Suzy, Gracie and Patti - I really appreciate all your comments:)))))

Great! I especially love the knickers!

She was just feeling sexy! nothing wrong with that!

I am in awe of your creativity Rob. Your imagination and the story-telling is sheer brilliance!

Love Old Aunt Sally and her revealed red knickers....LOL
My hat is of to your talent and imagination....thank you Rob :)

Fabulous thanks Rob and your sense of humour is showing, or is it Aunty Sally red knickers!
Hugs my friend ♥

Thanks Cindy - my pleasure:)))

Wow! This one is really nice...tfs rob! Love them!

Thanks Kirsten - they were lots of fun to do:)))