Some mementos from their trip 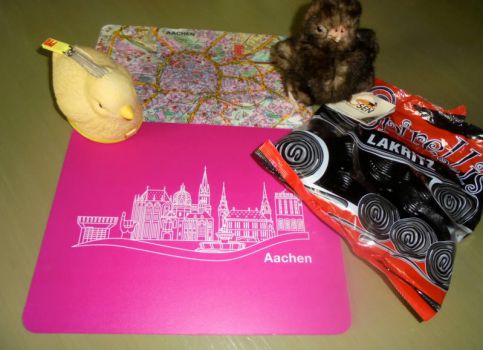 Created by 2dogs7cats Published 14 June 2015
Why this advertisement?

I love miniature goats as well..

I love minature goats. Can't believe that I've stopped myself from getting a couple so far. It's when I hear the coyotes howling and think of the long cold winters that my saner side prevails.

Edie, I just went through all the pages of Kosen animals on eBay, and now I'm sure I don't know which one I'll get. I love the face of the baby goat, but then I love the faces on most of their toys. The best pet I ever had was a border collie mix, and unfortunately the face of their version is not all that great.

Thanks PJ, and I totally agree. ☺︎

Edie, I'm so glad that your son and daughter could visit your "old home" area, and even got a hair cut, lol. So neat to hold on to family ties,
PJ

Just tried it again Wendy. The first link is fine, it's the second one that is just blank. What kind are you going to get?

Edie, I just tried both the links in my message and both work. Oh well, the prices on the ones I have are much lower than the one in your link. Regardless, I'm pretty sure I'm going to buy one off of eBay soon. They're growing on me.

Poor Daisy. I hope she protests if you call her Sweetie.

I'll head over soon and check them out. Thanks Francine.
Thanks PJ. It is a soft and cuddly chick and I have it on my desk with me. It looks a lot different than my two brown chicks who are tall and leggy now while it's short and squat. They usually visit my home town when in Europe because our relatives are only half an hour away and one of the cousins has a hair salon in Aachen so both my son and daughter got their hair cut.

Such neat mementos Edie, I'd go for the Kosen hen (in Norwegian it means "cuddle hen" ) - so give it a good hug from me, lol.
And Aachen is a real majestic city...
PJ

Wendy the link opened to a blank page for me but I found the same chick on ebay for $60 but the hen shown there is not the same as in the catalogue. Here's the link http://www.ebay.com/itm/KOSEN-MADE-in-GERMANY-NEW-Dark-Brown-Hen-Chicken-Plush-Toy-with-Mottled-Plumage-/191560629873
I could always just call the cat Sweetie. Her name will be changed anyway once she's adopted. ☺︎

Thanks Barb. I've never heard them called that but I agree that they are delicious. ☺︎

I think I'd like the Kosen animals just as much, especially after reading more about them. They are different, but I think probably equally terrific. I wouldn't go as far as to say that the Kosen animals are better, but that's just my opinion.
Meanwhile, there are different Kosen hens.....
https://www.google.com/#q=kosen+hen&tbm=shop

Laughing re: "SWEET mama cat." I think you should have people make suggestions as to what to name her. I think she looks like a Daisy.....but then, what do I know? LOL

Some very nice gifts from your daughter, Edie. My number one choice would be the licorice. I love that swirly kind. We used to call it Spanish licorice as kids ... don't know if that's the correct term or not. Anyway, it's delicious. :-))

Interesting Wendy. I would have liked to know the price of the possum. I had and still have some Steiff animals but this has a whole different feel to it. Heavier and softer fur. There's a picture in their catalogue of the hen with two chicks. I'll see if I can find it online. Right now I have to go and lock up and feed the SWEET mama cat while you can think of a name for her. lol. ☺︎

Thanks Ardy. Not placemats. One is a mouse pad and the other is a 'butterbrett'. It's like a little sandwich board. We've always used them instead of a plate when making a sandwich. Originally they were made out of wood but they're plastic laminate now. I wouldn't be without them. Use it every day. ☺︎

I thought it was a change purse, Edie. I wanted to see the difference between Steiff and Kosen but this is all I found after a quick search.
http://www.varclassifieds.com/koesen-opossum-kosen-opossum-i2368874/

When I was a kid, my mother only bought us Steiff animals and I truly loved them. I still have a few (one of my stepmothers gave away most of them without our knowledge). Anyway, even though there's not much information in the link, it's interesting. Aren't you the lucky one for receiving one of the Kosen animals!

BAD Edie, about the poor cat. I'm keeping my fingers crossed that all turns out well for her and the kitties. I think she needs a name. ;-))))))))

Place mats from your home town? Licorice and those cute chicks. Looks good. Thanks for sharing.

The yellow chick is a change purse, very cute. The brown chick is a handmade stuffy from Kösen. A company I had never heard of before Wendy but apparently the Rolls Royce of stuffed toys. She said she wished that she could have afforded the mama hen and a few chicks but had neither the space or the Euros. lol. I did however get their catalogue and the mama hen is adorable, as are all their stuffed animals and here I always thought that Steiff were the top of the line. I haven't named the mom cat Wendy because of the way she was up until two days ago the name I would have given her would have been very unflattering :-)))))))))

I think a description of the yellow bird and the brown chick are in order, Edie. LOL!
On a side note, I'm following the young cat's experiences with her babies. Does she have a name?