Check my "guess what it is" puzzle 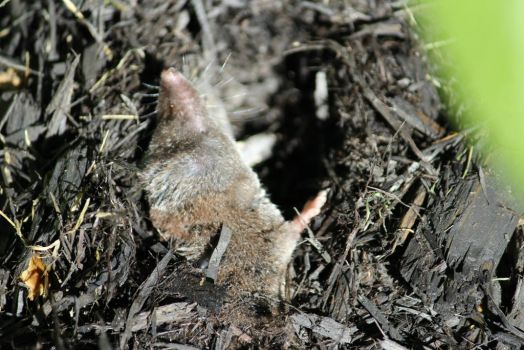 It was a little Shrew! All you could see in the other picture was something starting to poke out of the ground...
Created by 19590923 Published 10 September 2013
Why this advertisement?

Yes, it was just his snout. He was a little cutie.

So there was another picture of this shrew. All I could see looked like a root coming up through the ground. Must have been his snout.

Voles and shrews are close in appearance... but one eats bugs and the other eats roots, seeds, veggies etc. Shrews eat bugs.. I know... I fed him some worms just to make sure. If it had been a vole I would have relocated him as I have a veggie garden. We are having a bad year with grubs... I don't mind these little guys digging them up. Once the grubs are gone, these little sweeties will leave (I hope).

Cutie :-) when not in my garden at least

What a curious creature.

I was thinking that it didn't look like the shrew I've seen before, but then I realized that it was vole that I have seen before. ; ) Thanks for sharing this.