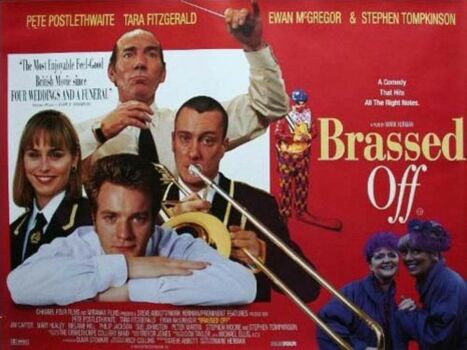 Created by starlord Published 24 January 2022
Why this advertisement?

@starlord, I hope the music is better second time around. The movie tells an important story!

@Eulalie Thank you, you are so right!

Thank you all so much, she is definitely on the mend, I think school tomorrow is one the cards.

Thoughts and prayers for a speedy recovery for your granddaughter Jum.

I am glad that you liked the film too, ekopug 1. It is really recommended to everyone :-)

When you watch it again, EP, you'll enjoy the music even more...
And this film is realistic, closing of the pits, colliery bands, poverty...

Thumbs up for your granddaughter, jum. I'm sure you're a great nurse...

Good move, Jum, I really think you'll like it. I'm sorry your granddaughter is poorly. I hope she feels better soon!!

I will try and watch this movie tomorrow, at the moment I have a poorly granddaughter to look after.

Starlord, thank you! I may watch it again tomorrow!!

I'm glad you liked it, EP...
And I couldn't have said it better than you did in your review

Thank you, blur! . . . Holding on to my old TV because it does not need replacing.

My Brassed Off DVD arrived from Amazon today and I watched it almost immediately. This movie was better than I expected, and I had high hopes for it from the beginning. The music was absolutely amazing! The drama parts of the movie are very poignant, and I have to say I "almost" cried at couple points. Very moving. Superb cast and director. Well worth the price of admission. I'm giving it the vaunted 3 thumbs up.

Maybe you saw this . . . 20th anniversary interview with Stephen Tomkinson. Brassed Off was his first movie. Epic interview, and I haven't even seen the movie! I did buy the HD DVD from Amazon and will have it tomorrow (Tuesday, 1/26)

Always nice to have a song with one's name

There are loads of trailers and fragments indeed :-)
All the songs to begin with
I like 'Danny Boy' :-) Now why would that be :-)

If you watch enough trailers on Youtube, you can almost watch the entire movie. I didn't realize Melanie Hill was in this show. I watch her on Coronation Street.

Nope. This video contains content from Miramax, who has blocked it in your country on copyright grounds

Can you view the movie with the link, blur?
Can't be viewed in the States. So I heard

We've become a "throw away" society. This is why landfills are filled to capacity. Good for you two for keeping your older tv's.

You know, I feel the exact same way! Mine is as good as the day I bought it. Movies look great, sports look great. Hey, I'm set!! Like you, I have other things to do. I'm not getting a smart TV!

I don't have a smart TV either. As log as this one works well, I don't need one. I can't watch it all at the moment anyway...
So many programs, so little time

I don't get Netflix. They bounced me because I would not buy a smart TV. My TV works as well as the day I bought it. However, I bought it 10 years ago. BUT at the time, it was the best TV you could buy . . . it was a 55- inch, Samsung Series 700. No, seriously. I was still working at the time and a client of mine in Orange County turned me on to his "entertainment guru." After the guru knew roughly what I was looking for, he phoned me a day or two later and told me where to buy it, what brand, and model number. Anyway, to make a short story long, I don't have Netflix any more. I may get forced into buying a smart TV.

After reading your comments and watching the 2 videos, I'd like to see this movie. But who knows when it will be aired in my part of California? Amazon sells the HD DVD for $13. Hmmm.

I contacted CBC, blur. They'll see what they can do

Everything is already arranged! One must be prepared, isn't it? So : no trouble for my kids ;-)))

A bit too soon for the funeral, eula...

Who knows, maybe it will be aired in Canada soon :-)

Oooooooooh yes yes yes! One of my all time favorite films. surely want to watch it again : for the story and for the music... :-))) One of those songs will be played at my funeral ;-)

Never heard of this movie, but after watching the link you sent it's one I'll seek out. I had tears in my eyes watching that speech.

Same here... I remember that too. It led to poverty in lots of households.

I remember the pit closures and the devastating effects it had on the community.

The film is about the troubles faced by a colliery brass band, following the closure of their pit. The soundtrack for the film was provided by the Grimethorpe Colliery Band, and the plot is based on Grimethorpe's own struggles against pit closures. It has been generally very positively received for its role in promoting brass bands and their music. Parts of the film make reference to the huge increase in suicides that resulted from the end of the coal industry in Britain, and the struggle to retain hope in the circumstances.

In the United States, the film was promoted simply as a romantic comedy involving McGregor and Fitzgerald's characters.

You will surely not regret it... I'm sure you can rent the dvd at any library :-)
Another British diamond is : The Imitation Game... but that poster is for later

OK you win, I will watch it if and when it's shown on the TV.

I just looked up the meaning of title as I didn't know it. I linked it to the brass of the band. but All Knowing Google said:
British, informal. : annoyed and unhappy feeling a bit brassed off.
And this concludes today's lesson

Absolutely not :)
I saw the Full Monty.... and Calendar Girls :-)
But this one is one of the best British movies I ever saw.
And even I'm not to into brass band music that much, the music of this colliery band is breathtaking.
I saw this movie some 3 - 4 times and it touches me every time

If you have seen it, it sounds similar to the Full Monty.

This is a wonderful movie and you really should see it. Pete Postlethwaite was a great actor and I was truly a fan.
The coal mine in a northern English village may be closing, which would also mean the end of the miners' brass band.
Just check the trailer (you really really should see this film) :-)
https://www.youtube.com/watch?v=_b4zPoleN28
And this is the (emotional) musical ending of the movie
https://www.youtube.com/watch?v=aX035j00Pxc

I have never heard of this movie.

I'm not familiar with this movie at all.