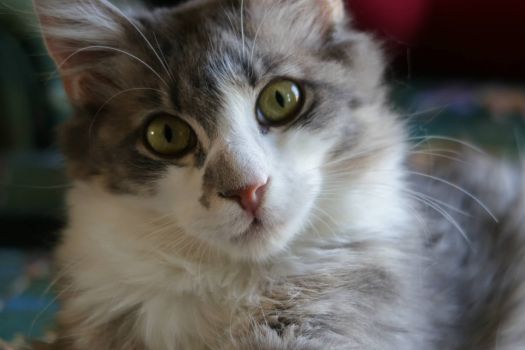 Our newest addition!
Created by MaryEPear Published 21 March 2017
Why this advertisement?

I do use a spray bottle, and it works to a degree. I have put a bit of vinegar in the water, too.

I have found that a spray bottle filled with water is a great "weapon" for correcting kitty's bad behavior. A few squirts will usually stop any bad behavior pretty quickly, and it doesn't even hurt.

I might be able to create a puzzle with a new photo of Leo. I have a new camera, so I will have to give it a try. Your neighbor's cat is much like Leo, except he attacks me rather than the furniture! Thanks and Happy New Year to you!

Papaya just bites my hands and arms, mainly when I'm at the computer. He sometimes draws blood. No bites for over a week! We're feeding all our cats too much and too often--especially since my partner is now working at home and has a real need to feed--and three are overweight. Papaya is the biggest, and apparently doesn't get as hungry as he used to. But we're risking health problems, especially diabetes, unless we cut back more.

One thing I forgot: besides the homeopathic, we also used aroma therapy on the previous cat with behaviour issues. I don't remember the details--maybe it was a diluted drop on the neck of something that was safe for cats. I'd never try it without guidance--essential oils can be toxic to cats.

Gosh, another long message from me. Wishing you all the best for the new year. -Patsy

So glad to hear from you. And glad that the spray bottle works. Sorry to hear about your husband's health. Sending him and his caregiver (you) lots of love.

You may have seen my puzzle with our visitor cat:
https://www.jigidi.com/created.php?id=redr63y6
When he wanted to go outside, he attacked curtains, furniture, plants, clothing, etc., so the neighbour family gave in and let him out every day, and he was happy. We became very fond of him and helped groom his long fur that would mat without constant attention. Sadly, he disappeared last spring.
I hope Leo stays safe!
Any recent photos?

Oh, how nice to hear from you! It's been a year since I wrote about Leo and his biting. Well, he is still biting me! My ankles and arms are full of scars. He has become a cat who wants to be outside all the time. Where we live, he isn't supposed to be out, but so far no one has complained. I have not consulted our vet, but I have inquired about a behaviorist. I don't think he is in any kind of pain - I think he is just an alpha male and wants his own way! He seems happy enough and is on his own schedule as long as the weather is good. He hates staying inside if it is snowing or raining, but if I open the door and he sees that it's bad out, he stays in! Right now my husband is in poor health and most of my time is spent seeing after him, so Leo is not at the top of the list. I do think about finding another home for him sometime - I know of someone in the country who would probably like him - but we would miss him terribly! He can be sweet when he wants to be - he lays on the couch and watches TV with us in the evening, and he sleeps at the foot of our bed. He does not purr - never has! So, that's the latest on Leo. Yes, he is 4-1/2 years old now. He is still handsome, but has gotten quite large. I enjoy reading about your cats, too. Nice to know how others train and enjoy their kitties. BTW, the spray bottle does work with Leo!

One of our cats, Papaya, bites only me, and only occasionally when he wants me to feed him a generous snack. Instead of me, he sometimes starts to chew on computer or phone cables, but much less than before, maybe because I get angrier about that. Sometime he just gets on the computer keyboard so I have to stop what I'm doing. He's big and not easy to move. I'm afraid he has me well trained--about half the time I do give him a snack, sometimes when he just threatens to do something annoying. The spray bottle doesn't work for any behaviour we want to stop--he seems to like the water. Unlike his brother, he doesn't seem to have a conscience.

With a previous cat that had behaviour issues, a cat behaviourist worked wonders with the cat, mainly by coaching me plus a homeopathic for the cat.

I hope you and Leo can work it out.

Just a thought, maybe worth considering.
Have you ever looked at a homeopathic approach? They need you to describe the animals temperament which is how they diagnose. I had have had great success with three of my animals and would rather do natural treatments.

Oh Mary I really feel bad for you. I have no idea what can be. Unless he gets some sort of pain, when they are in pain they defend themselves as if we would hurt them. What does the veterinarian says?

Thanks for all the helpful suggestions about the cat biting. However, I have tried them all! I do keep a spray bottle near me (I call it my weapon) and it does deter Leo for the time being. I have also tried the "ouch!" approach and then walking away from him. Sometimes he'll go for a few weeks without biting, but then all of a sudden, there it is again. He does draw blood - sometimes right through jeans and anklets. He has very sharp teeth. He usually does it when he wants something I won't give him - like letting him out at night! I guess it's my price to pay for his companionship when he is behaving himself.

@Plumpossum I had three cats before, the oldest a girl passed at 20, then came the two boys... the last boy was an angel, never needed a reprimand... the other boy did needed the water bottle when very young, and so did the girl that was always trying at my plants. Well my new boy now 5 months could be a hands full at times. Some days ago he decided he wanted to jump on the dinette table, so I got my spray bottle out... I could have soaked him and he had no idea what was all about. He sat and looked at me with a totally blank expression. On the third sprinkle I decided to stop, it looked like he was going to enjoy "the game"! I couldn't believe it. Some long hair cats only need papers to be Main Coons, papers or not, they are highly intelligent so anything below their standard is like "what is that silly thing about?"

The most effective, and least harmful, way I have discovered to discourage bad kitty behavior is a simple spray bottle filled with water. When a bite seems imminent, a quick squirt will probably stop it in its tracks. Let us know if this works for you.

Yes, I posted it when he was still a kitten. I have a messed-up computer and have lost a lot of my photos and I have also forgotten how to post them! One day I'll get back to it.

Mary, as it shows in the posting, this one apparently you created and posted yourself. Maybe Jigidi re-posted it. I read somewhere they keep them forever and would not be surprised they used it again.

P.S. I actually have a puzzle of this photo. My daughter had it made for me for a birthday a year or so ago!

Thanks for posting this sweet photo of my little Leo! He is now 3 - 1/2 years old and he is still biting. He does draw blood, and I have lots of scars on my ankles and arms! I can't seem to break him of the habit. We love him dearly, but he really is a trial at times!

Mary he is very handsome! Hard to believe the bitting is an affection thing. My female never did but my two males did / do. Some bite harder than others. Have you tried to reply to it in a playful overacting face "you are hurting me way" and say ow,ow or similar. Ours respond and stop. That is if he is not aggressive in any other way. Hope that helps. Bird

Thanks. He is sweet, but he loves to bite me - pretty hard! I am trying to break him of that.

Beautiful. Looks like he has a very sweet disposition.