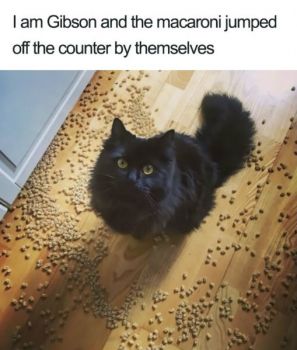 I haven't heard of Mexican jumping beans for years. Wonder what's become of them. Are they still available?

Lol, jigsawfanatic - just one on the boxes. He's unable to resist the challenge of the tape! He's figured out that if he sits on the box a minute, it will loosen up a spot - and then - to work. :)

Two on the purses -- they look in, see something, and start digging for it. If that's tough, tip it over and remove everything. I don't like those with flaps that lock, so I guess I'm an enabler. The third cat will sometimes do this, but it's harder for her, as she has only one front leg, but she's "helpful" at spreading the contents.

Yes, 6toedcats could hire her cats out to open Amazon boxes. We get tons of deliveries to our house.

As 6tc said, Wendy, at least a broom and dustpan will clean it up. :)

I was laughing out loud at this one. They are all funny, but this one has happened to me...........Wendy

At least it's nothing a broom & dustpan won't cure! Mine have never been on the counters, but they are good at emptying my purse if I leave it on the floor, or unpacking boxes from amazon. :)

That look says not me not me☺☺

Even though he doesn't look guilty, laurajane. :)

Yup, Fredde, put a handle on him and he'll have that place spotless in no time. :)

Gibson is a ready-made dust mop. Put him to work! Gotta love that face....

Not experience, PD. Our cats weren't allowed on counters or tables so we never had any surprises on the floor. :)

Garfield liked lasagna, so maybe give the cat some lasagna.

Forgive him. He's so beautiful.

Then tomorrow you would have everything on the counter top on the floor. Don't think so. :)

Probably give the cat a special treat for all the hard work trying to sweep the floor with the tail.

Strange, he doesn't look too upset with it all. Maybe just a little bit leery of what the human is gonna do about it. :)

Must have been pretty tramatic for the little guy, getting knocked in the noggin by noodles like that. Poor guy. :))

Jumping out of the box - I'll bite, but it looks like the mac was helped around the floor with that tail...

Of course it did. Macaroni does that all the time! LOL. Cats are innocent until proven guilty in mama's court.

sbwilner - Until mama discovers what's in the Roomba, then then the gig is up.

You should have taught yourself to turn on the Roomba, then no one would have known for a while... Sherry :)))

Sure. I believe that.