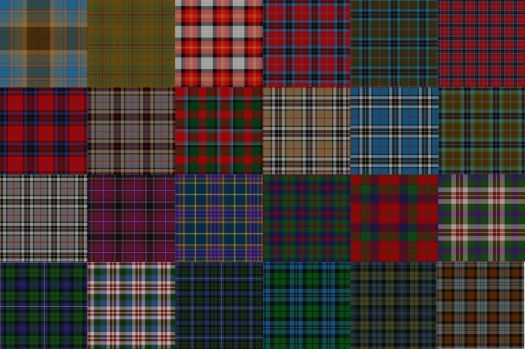 The Clans of Thomson, Robertson and Campbell tartans all feature in this puzzle.There are lots of Thom(p)sons around, it is one of the most common names in Scotland today, Thom(p)son is popular in the Borders, Lothians, Perth/Argyle. Even in Shetlands where the name was ‘Thomason’ ‘Son of Thomas’. Clan MacThomas are a Highland clan, originating from Perthshire. The name comes from the clan's progenitor - a Scottish Gaelic speaker named Thomas, who was known as "Tomaidh Mor". A grandson of a Chattan Confederation chief, he felt the Confederation had become unmanagable and re-settled with his clan in Glen Shee. The MacThomas clan motto is "Deo Juvante Invidiam Superabo" (With God's help I will rise above envy) and the clan crest is a wildcat holding a snake.

Thomson (without the ‘p’) is the most frequent spelling in Scotland. Thompson (with a ‘p’) is found more in the North of England and Thomas in Wales. The earliest documented Thomsons spelled with an (a), (e), and sometimes a (p), had slowly evolved from the 12th century into families with a central head or leader in the border and Lothian areas of the Scottish lowlands from Dunfriesshire to Roxburghshire. So if your name is spelt with a ‘P’ an ‘A’ or an ‘E’ the chances are you come from the the Thom(p)son’s of the borders. But remember spellings change, so see if you can trace back a consistent spelling or see how it was originally spelt in your tree. Thom(p)sons were located in the West March of the borders. They were among the border Clans listed with lairds (not the same as chiefs) in the 1587 and 1594 Acts of the Scottish Parliament.


The Robertsons claim to be descended from Crinan, Lord of Atholl, from whom sprang the royal house of Duncan I, the King of the Scots. The Robertson clan is more properly called ‘Clan Donnachaidh’ from their ancestor Duncan, who was a staunch supporter of Robert the Bruce, and who led the Clan at the Battle of Bannockburn.

The general surname of the clan Robertson was taken from Robert Riach (Grizzled Robert) the clan chief, who was known for his intense loyalty to the Stewarts. Riach was responsible for capturing the murderers of King James I, and was rewarded by the crown for this act by having his lands at Struan erected into a Barony.

The clan was also granted a symbolic memorial by additions to their coat of arms – subsequently the chief of clan Robertson bore as his crest a hand holding an imperial royal crown, and underneath a man in chains, representing the regicide. About a century later, the Robertson family lost the lands of Struan to the Earl of Atholl but the family regained them in 1606.

However in the seventeenth century, after the final defeat of James VII, all Robertson estates were forfeited and the chief of the Robertson clan joined the exiled court in France. To this day the chiefs of the clan Robertson still have the right and privilege of interment in the family burial ground at Struan.