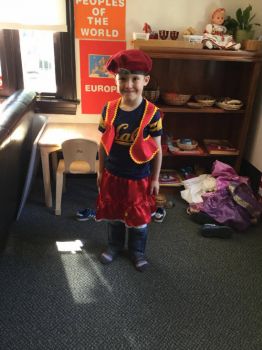 way to go
now ain't he dressed up for sure

If I succeed I'll let you know, Jane Doe.

Thanks, Kirsten. I had thought there were only the two witches. I'd forgotten about the one that melted. I'll have to revamp my memory. ☺

Ah ha! My memory WAS playing tricks on me. According to Wikipedia, Glinda was the good witch of the SOUTH! Not East as I thought. And there was a Wicked Witch from the East, who was dispatched when Dorothy's house landed on her. So there were two good witches (north and south), and two bad witches (east and west). But it seems that some were never named in L Frank Baum's original books, and were mis-named by MGM in the movie!! More here, for those folks interested in Witchi-pedia (I just made that up!)
https://hiddenhistoryofoz.wordpress.com/2013/01/27/four-witches-in-oz/

Thanks Ardy. I didn't have time to check that out myself last night. But I will have to find out who the house was dropped on!! (❛ᴗ❛)

You're right, Kirsten. It was the Wicked Witch of the West that had the house drop on her. Glinda was the one who told Dorothy how to get back to Kansas - click your heels three times. ☺

Uh, oh. I'm gonna have to check now. I thought the witch from the east, was the good witch - Glinda. And that she wasn't killed. And that the witch from the west was the wicked one. But I do seem to remember a house landing on one of the witches too. (actually, as an aside, a friend of mine used to say "don't make me drop a house on you" when she was getting annoyed by someone - which I LOVED as a phrase!) It's off to google for me!! Thanks Paul! (❛ᴗ❛)

@RandomWorship I was also thinking of "The Wizard of Oz," but in my case it was the legs of the Wicked Witch of the East sticking out from under Dorothy's house after it landed on her.

Love the sounds of how he dresses up. Your mention of a tutu reminds me that in the same picture I mentioned, my nephew had one on too. And a long string of pearls from memory! LOL!! And I had another thought about the pile of clothes with the shoes sticking out. Although I mean no insult to any child who may be beneath the pile of clothes. It kind of reminded me of when the Wicked Witch of the West was melted in Wizard of Oz, and all that was left was a pile of clothes and her shoes! At least that's what I think happened. Off to Google to check............

Thanks, Kirsten--of course we think he's gorgeous, too! He loves to combine things like a superman cape, fireman boots, and a tutu, while carrying a light saber, say..... :-)))
As for the shoes sticking out, it definitely could be a child--I hadn't noticed it before. Clever way to escape the chaos of a roomful of 5 year olds!

I commented before solving. And now I've solved, I see more - and have to ask. Is that a little person lying under the pile of clothes in the corner? The shoes sticking out make it look like there could be someone under there, having a little nap! LOL!! (❛ᴗ❛)

Gorgeous boy, suemarie! And I LOVE how he's dressed! He looks really pleased with himself. As well he might. One of my favourite photos of my nephew is from when he was about four, and he and a friend both dressed up as fairies! Soooooo cute. (❛ᴗ❛)

I thought so, too--I've written twice, about two weeks apart, to one of the syndicates on its own web page where it specifically asks you to query them about using their work, and both times I asked for a price, not just to use it for free, and still no reply.

By the way, posting puzzles privately is not "trying to do an end run around you" folks--in fact, it doesn't have anything to do with you, although I know you want everything to be a reaction to your actions.
I've written to several cartoonists/syndicates for permission, and haven't heard back, so I'm not posting their work publicly until I do. When/if I receive permission, I'll go back to posting them the way I did. Have a nice life.

The little guy looks like me when I try to dress myself. Cute.

Your grandson is so cute, Sue. Thank you.

I know @JaneDoe. I don't post puzzles that often. The public domain stuff is pretty old stuff. Now Sue probably remembers when it was all fresh. :-D

I'm the one leaving, dear.

I was just over on the Trump puzzle leaving you a note LOL. We've got to stop meeting this way!

See, I really DO need a vacation! LOL!

Yes, I had to do a double-check!

Thanks Lela I have been going around in circles for 10 min. trying to figure out what I was doing wrong :-)

You've repeated one of your links, above.

What a handsome and well dressed young lad! How often do y'all visit?