A Sad Day in Fernwood 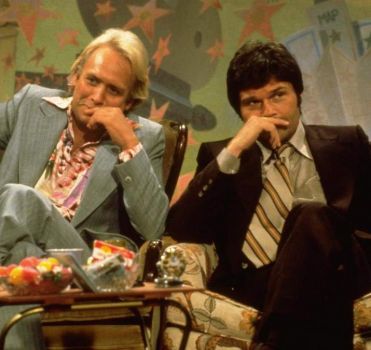 By now I am sure that some of you have heard of the passing of Fred WIllard (86). And some of you may not of heard of Fred Willards passing. And some of you may not know who Fred Willard was. That is why I am here. As a founding member of S.P.I.T. (Society for the Prevention of Invisibiltyness and Transparency) and S.A.L.I.V.A. (Society Against Living Invisible, Veal and Artichokes), it is my responsibility to assure that Fred Willard stays alive in our minds and our memoriess... to assure Fred Willard does not become invisible. That is the job of S.P.I.T. and S.A.L.I.V.A.

♥ Thanks John. I'm one handing it today, had trigger finger surgery this morning. and they are still unusable.

Thank you Julie. I know somewhere out there Mr. Willard is saying something totally nonsensical and bringing a smile to whoever is listening. Years ago I would not have had the courage to say this in public, but now with transgenders, cross dressers, a gay Mr. Ed, Micky Mouse and Goofy kissing in public... I can now say I loved Fred Willard. I will truly miss him.... along with my pet rock and my Rock 'Em Sock 'Em Robots

Judy, I cannot take all the credit... I take inspiration from everyone I meet here in Jigidiland of which you are a large part. Thank you... for being you...

You are most welcome, Mischka, but all credit goes to John. @rswestley

As long as I live, Fred Willard will live in my heart. Thank you, John.

Thank you, John and @jals, for the nostalgia trip.

My Dear Dear Mischka... you are too kind. You misinterpret my intentions and shower me with "All Hells" and "Reverend Geekings", when in fact, the posting of this puzzle was purely a product of my selfishness. Look around you. Unlike the Mischkas and Hoffs of the world, we and people like me, are all around you. We are everywhere. And yet nobody sees...

The world of invisibilitiness is overcrowded with shadow people. It is becoming more and more difficult to find a personality, a memorable thought or an unforgettable face. So you see, the posting of this puzzle was to bring much deserved recognition to the 'Jerry Hubbards' of the world... to keep the memory of all the 'Jerry Hubbards' alive.... and to keep them the hell out of my Invisible World. As it is now, I have to make a reservation to use the bathroom. Go HOME Jerry Hubbard! Go back into the minds of extraordinary people.... and get the hell out of my 'house'....

My apologies if you are embarrassed by my use of the "I" word... but I just call them as I (don't) see them

Um... what? Were we competing?

Dearest Dread Pirate Westley, I'm sorry, didn't even notice. I assure you, I have no intentions of staging any coup, and I am happy to let you be the Queen. Though I always assumed you (or perhaps TIM) sought the role of éminence grise.

I would certainly need the permission of a certain Ruler of the Universe and Beyond to ascend to any such role.

But I do congratulate you! Half a minute is very good, you know! Besides, you deserve all the "All Hails" and "Reverent Greetings" because you posted this very perfect puzzle picture.

For that I bless you, sir. I have mourned Freddy W, but it didn't even occur to me to bring him to Jigidee, so you bested us all there.

YEA!!!! I ousted Mischka from the top ten with my astonishing time of :32!!! Mischka, you best rethink your goal of staging a coup so you can be the undisputed Queen of the Jigidian Empire and having all the riches of a member of congress. I am a free man! We are a free people! I regret having but 16 pieces to assemble for my Jigidi!

I own the Christopher Guest movies, all of which Fred Willard was in. I'll never forget him and will always miss him.

In 1977 I would have been in highschool and my dad ruled the television. Every night we had Mash on and then whatever else he wanted to watch. Back then most families only had one televsion. If Dad was busy doing something else, we could fight with our siblings to find something else to watch. Gunsmoke, Ed Sullivan, and Lawrence Welk were the Saturday night offerings. And Saturday night baths. The best time slot for a bath was during the Lawrence Welk show. Sunday night were the Disney movies. Back then a family of 7 had 1 t.v. Today for 2 people we have 3 televisions. Crazy.

6rescues and wobby, thank you for your efforts to keep Fred Willard visible. Too often the talented (and not so talented) people that used to entertain us have gone to that "side show in the sky" leaving no fond memories behind. It's not unusual for a normal, boring person such as myself to become invisible, but it is sad when once popular people such as Fred Willard gets tossed aside and swallowed up by "the hash" that we call life. Thank you again... "Long Live the Old People!!"

Judy, you were but a child when Fernwood Tonight was competing with the "Cold War" for top billing in '77. Amazingly, Fernwood was originally a 3 month replacement for "Mary Hartman, Mary Hartman", but due to it's ability to amuse and befuddle the American people it came back as a "regular" show the following year.... and then it was gone.... and people all across this great nation of ours were left to find the humor in Richard (tricky dicky) Nixon and the pounding of size 10 1/2 shoe on a United Nations podium compliments of Russia's Nikita Khrushchev.

I'm glad you enjoyed the clip Judy. I spent several hours yesterday watching videos of Fernwood Tonight on YouTube... and I think I am a better person for it....

Watched the first clip. Now I wish I would have known about Fernwood Tonight.

Hadn't heard that, John. He won't become invisible though. I remember him for his role as Robert's father in law in Everybody Loves Raymond. I wasn't familiar with Fernwood.

I too loved Fernwood...