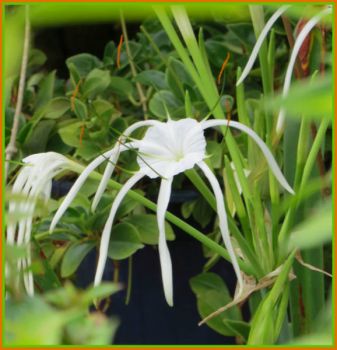 Something new for you then Nicky & Cathy - there are heaps in flower right now around here! Thanks for dropping by!!

I've never seen one of these either!! Great picture. Thanks Rob.

Never seen this one before!

I noticed the pollen stems - stamens? - too Dave - they're really fine.

Thanks Gracie - glad you liked this one!!

Every day I see something new and interesting, this if beautiful Robyn! thanks

Those "legs" are so delicate! Excellent photo, Robyn!

THose little pollen stems holding the pollen out there are very cool and unusual!

Erupted is a good choice of word, Robyn they look like white volcanos that just did that.

Another one I never saw before, it is very beautiful, thanks

yes, they have a wonderful scent. At least mine do! See my posting last 26th September.
thanks Robyn - lovely photo!

Thanks Janet - these are next door and they didn't flower until we got the 58mm a few weeks ago - then they erupted!!! Thanks :)))

Hi Rob, pretty puzzle. No, mine certainly aren't drought tolerant! I got one little flower this year, but my sister who leaves near by only has one tiny garden and she can use her water ration to give them a good soaking, has fabulous flowers. Thanks, Janet ♥ ♥

Ah! Thanks for clearing that up Barb :)))

I grow them in a pot so I water them adequately. I don't think that they are drought tolerant, Rob.

I thought you'd see the likeness Nev :))) Yes - I did notice Robbos's puzzle - and a couple of ring-ins are there too!! I'm not sure what type of parrot they are, so I'm off to see if I can find out!!! Thanks!!

AH!! That's interesting to hear Barb - so they're quite drought-tolerant then!!! There's lots of them flowering in garden beds around my local shopping centre too at the moment, and they would probably rely mostly on rain, not hosing!!

Rob, I did not have them in Florida but I do now...but mine are still small bulbs and long way to blooming :) Botanical name is Hymenocallis littoralis.

Hi Rachael - I'm glad I identified it for you then :)) They belong in the Amaryllis family and originated in China apparently! Thanks for commenting!!

Thanks Beekay - I've never smelt them to be honest!!!

Thanks Barb - did you have these in Florida?

It is so pretty, Rob :) Thank you for posting!

How interesting Rob. Good name for it. Any scent to it?

I have one of those lilies but I never knew what they were called. It has been passed down through my mother from her grandmother. I can only put it outside in the summer where I live now. I have only seen them once outside when we visited the Virgin Islands. Thanks.