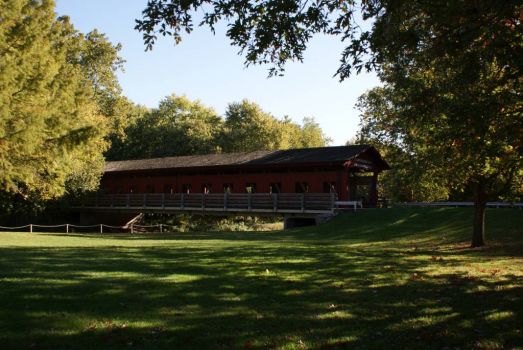 Created by chickiemama Published 18 October 2012
Why this advertisement?

It's VERY interesting, have seen them on movies!! Thanks Sandy!!

Love the bridge. CM, the color of these trees look like they could be here. Trouble is they'll get pretty, and ours will just sit there like this till they freeze then fall off! Oh, such is life (in the fast lane)!

I didn't mean tu, trick you.

I get it! You tricked me. LOL Yes, that would be the half way point.

Thanks Chickie for the info. I'll write it down in case we are ever close. Would love to see it.

So that is by Champaighn about the halfway point, chickie.

I missed your comment punkie. I read the history at the sight but , well, I'm a victim of CRS. Like someone else we know.

Thank you shirley. I really didn't pay attention, but I bet you are right about the foot bridge.

Morris, I don't have a clue where 173 is. LOL If you start at the intersection of Illinois Route 47 and Interstate 174, you would go north on Route 47 and drive approx. 1/2 mile and turn right (east) directly into the Lake of the Woods park.

I will have to look up the history on this bridge. Love old covered bridges. A way of the past.

Is that a pedestrain walkway down the outside of the bridge? love these covered bridges, we don't have them in Australia. Thanks chickiemama.

Hi lyndee. Yes you can drive over it lyndee. It is in Lake of the Woods forest preserve (just off of Rte. 47) and North of Interstate 74.

This is really a long covered bridge. Are cars still allowed on it? Would love to drive through it.

I love them too. Thanks

These covered bridges intrigue me!! Thanks chickie:)

This bridge was dedicated in 1965.