Did one stork forget to build its nest? 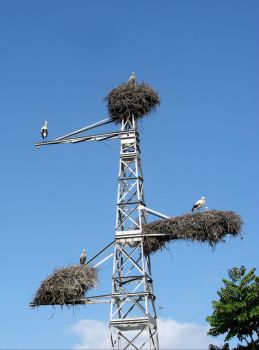 Created by FraLa Published 25 December 2019
Why this advertisement?

From USA Today:
In its sixth presidential ranking since 1982, 157 scholars surveyed by the institute (Siena College Research Institute) ranked Trump the third worst president of all time after Andrew Johnson (who was impeached) and James Buchanan (whose presidency was followed by the Civil War).

Yes to the first statement, no to the 2nd. 63,000,000 fans is not some fans, it's a huge number of fans. And Trump rallies draw way bigger crowds than any Dem could ever hope to have.

jigsawfanatic: You seem the kind of person who thinks Donald Trump is the greatest president ever.
The fact that the rest of mankind (apart from some GOP-fans) think otherwise is also a hoax.

So called climate change is a hoax. When God created the heavens and the earth, He created the earth with natural cycles of heating and cooling. It has nothing to do with global warming at all, as currently promoted.

We had a lightning strike on an evergreen tree in our yard, and I found a dead crow at the bottom of the trunk. The tree was split right down the middle. We were even featured in the local newspaper, which embarrassed my mother. Must have been a slow news day.

There was an owl that was fried on high tension wires. He spread his wings to take off, and died instantly. The momentary interruption was detected by the power company, and the fried owl was discovered on the ground below the wires.

Birds don't get fried. See: https://www.wonderopolis.org/wonder/do-birds-get-shocked-when-they-sit-on-wires
It's a bit more complicated than it says in this article. 30 kV to 50 kV is already a different story.

In my book climate change is only denied by people who don't want to pay for the consequences. That's why "Forum for Democracy", a rather new political party in The Netherlands, was pretty successful during the last elections.

I don't believe in climate change, so the storks are nuts.

A high voltage power line tower does not appear to be a safe place for a stork to land. One mistake, and the stork is fried.

I'm not sure about this one. It's a picture from 2018. North of Spain. Both there and in Portugal you see a lot of nests in high voltage towers.
I was in South Portugal a few weeks ago and storks were already inspecting nests. Climate change, or are the storks nuts?

"Nuts! I should have started earlier!" LOL.