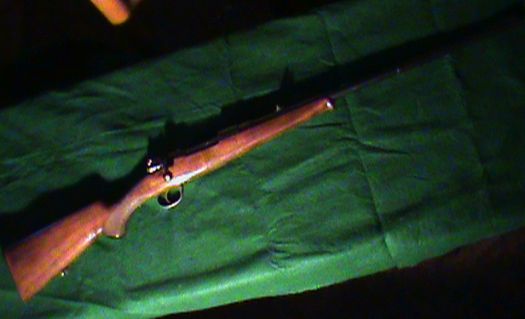 Thanks for the info. OldManMontgomery! Much appreciated! Monica ♥

Any firearm has more recoil (kick or kickback) with heavier bullets than light bullets. However, the design of the stock and weight of the arm (heavier is less recoil) can do much. As can a proper recoil absorbing butt plate.

And always, always, hold a rifle (or shotgun) tight against the shoulder. DO NOT let it get a running start into your shoulder. Hand guns are not possible to hold against the shoulder, but must held with a firm (not deathgrip) grip and the elbows held straight. Let the shoulder joints do the rising if such happens. At least you won't bash your forehead.

I understand it that rifles have a really nasty kickback, and people have been known to hurt their shoulders at times! You really have to know your stuff about them! Monica ♥

I am an avid collector of firearms, and I fancy I am acquainted with much history.

I like the idea of being "introduced" (perhaps "re-introduced") to shooting. The more folks knowing how non-violent and relaxing the activity, the better the society. Not to mention, concentration and attention to matters is far more important than mere strength.

I see your a gun lover, so is my husband, he has all of his father's guns since he passed and has a few of his own. He keeps promising me that he's going to take me target shooting but it hasn't happened yet, I keep waiting patiently for it to happen! Monica ♥

Not really. The cartridge is really about the same as 8x57mm the German round from 1888 to 1945, not some dinosaur killer. The rifle weighs about six and some odd pounds, so it is 'brisk', but easy to carry on long stalks. Not made for shooting cans all afternoon.

Very popular in Europe (where 'military' calibers are banned).

So the recoil isn't so bad, eh? I suspect it would knock me flat! :o)