The Start of Something Big 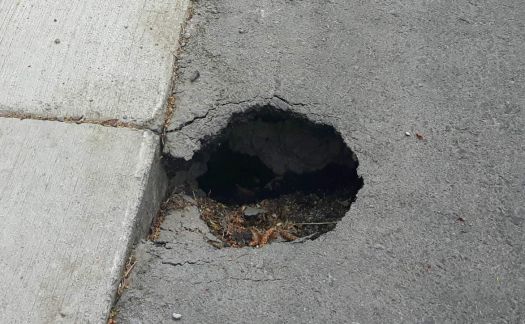 They paved this street only 18 months ago.
Created by JM_Cookie Published 22 May 2021
Why this advertisement?

You must admit the response to your e-mail was lightning speed!! They will definitely have to take a number of weeks off to recover from all that activity.

Well you did send them the photo. I hope that it isn't your car.

I sent this pic to the Regional Government in an e-mail requesting a repair. The region said this is a rain water problem and passed it on to the City Government for repair.
The City has now decided it is structural problem and passed it back to the region for repair.
It has been a week since I sent my e-mail, any bets on how long it will be before they can get it fixed. They might argue until the hole starts to swallow up cars.

Well, that's eggsactly what I did!

I don't understand why contractors are not held accountable for the work they do. I have seen the same issue with our streets. The contractors build them and the city fills the holes.

This hole was not there last week.
I try not to get too close, I would like to go to Australia, but not like this.

Yes Mat it looks like they didn’t pack the base properly before paving. It should be dug up ,add a gravel base , packed, and re-paved. Even if they fill the hole and patch it , it will probably return later.

Must be Australian gopher Spaceworms!

You've got a bad case of gophers!! Alert the dogs!!

I had a good look inside, and found it leads to Augusta, Western Australia ...........
Hoping that information is useful to you.

They didn't do a good job with the base. This is going to get very ugly very fast.

I've often thought that when someone does such a bad job that it has to be redone almost immediately, they should have to return all the money they were paid for the job.

This is not good.