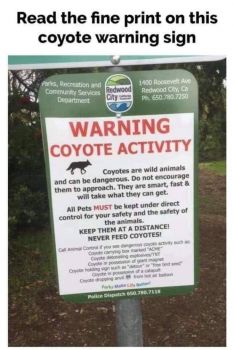 Created by Sissel Published 23 September 2020
Why this advertisement?

Quite a story, blue eyes- No doubt the animal saw those blue yes and knew it had nothing to fear- They are quite attuned to danger-
Jean

Thank you so much Beb for the story. Sometimes it is the small letters giving the meaning :-))))) Hugs

I was a bit slow to get this. It wasn't until I got to the "free bird seed" bit that the penny dropped. (Didn't get to watch much of the coyote and the roadrunner, as a kid).

I was in the backblocks of Canada during winter a couple of years ago, taking photos. I saw a big dog that looked like a German Shepherd trotting along a road a couple of hundred feet below me. I ran along the ridge to catch up with it and suddenly found myself much closer to it than I expected. It had come up the hill and was busily digging a hole in the snow. I watched, fascinated, and crept closer, taking photos as I went. I'm SURE the dog was aware of my presence, but didn't seem perturbed at all.
Eventually it stopped digging, having apparently not succeeded in catching whatever it was chasing, and walked up the slope to the ridge I was standing on. It didn't look at me but turned and started to walk nonchalantly away in the opposite direction. I followed. It started to trot. I sped up. So did the dog. It showed no sign of fear but was apparently just keeping a constant distance between us, without ever turning around and looking at me. Eventually we lost contact.

When I later reported this encounter to locals they confirmed that the dog was a coyote. An interesting experience for a sub-tropical Australian.

Correct Ms_Maddy :-)))) Thanks for coming by

Thank you so much Jean for the explanation :-)))))

The sign was printed by the employee who was told today was his last day of work due to budget cuts- he wrote all this because he would have been arrested for making terrorist threats had he written what he REALLY wanted to!
꒰•‿•꒱Jean

Thank you so much Janet, Heidi, Humminbird, Alias, Puitepe, Zumba, Ank, Juba, Robbos, Ceefercat and Tincup for coming by and commenting.
Signs with humor is sometimes easyer to understand, but I am glad the most dangerous animal around is a fox. In Jylland they have wolfes :-))))))))

I love it thanks Sissel, especially the small print. Where my son and daughter live, in CA, used to be an open area next door and they saw a coyote there one morning. That block of land is built on now.
Hugs ♥♥

Oh, that is hilarious! Reminds me of those old cartoons we used to watch! Wile E. Coyote was a great one, but he could never seem to catch that roadrunner! It's nice to see that Redwood City has a sense of humor.

i like that sign; at least they try to kate things with a bit of humor. and, in areas with serious coyote or other predator activities, people living there know what to do.

Have you ever seen a coy wolf. They are stronger and hunt in packs . They are in Mississauga near Toronto. The coyotes mate with wolf. They are faster and meaner. Even in the daytime walking in a park you can meet one. Pretend you are bigger than he is or you become a prey. No fairy tale.

I have met coyotes in person and had to save my full grown collie by yelling and throwing things. I live in California. Many of us have a sense of humor.

Roadrunners are actually slower than Coyotes in real life. Cartoons are more fun, still rooted for Wile.E.Coyote even though he could never get that bird

Message understood and now I'm scared of them☺

That roadrunner better watch out!!!

That is okay Penophil - I see the fun

Never met or seen a coyote. But that fine print is too stupid to even be funny

Good morning Bjresh. I only know them from one of my favorit cartoons :-))))

LOL! One day I saw a pretty blond dog walking Long the sidewalk looking for food, very hungry. I stopped to try to feed him something and he slowly came towards me then several teens came along and yelled "That's a coyote!!! I noticed he was very dehydrated -- we had a drought and he came down the hills to find water. Never knew what happened to him and feel guilty to this day I didn't do more.