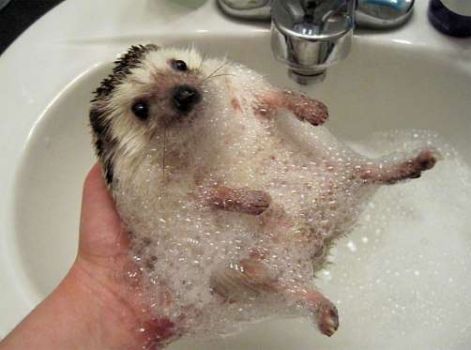 As Char already told you, they are quite common in Europe/Western Europe.
And although I lived in a wood for many years, I hardly ever saw one; they are night animals.
My ladyfriend who lives in a village, sees one nearly every evening in her garden. He tramps from one garden to the other, squeeses himself (herself?) through gates and under fences to follow the path he/she wants to follow. They love being fed. Often they get milk, but that is very bad for hedgehogs! Cats feed is good for them!
They often die by being run over by cars at night.
They have to eat a lot in autumn, as they sleep nearly all winter!
It could be that the hedgehog on the pictuere is an orphan and will be kept untill it is old/wise enough to look after itsself. Normally hedgehogs are never held as 'pets'.
Nearly no dogs bother with hedgehogs, as they roll themself to a very prickly ball when in danger!

Maybe that's why this little guy is getting a bath! LOL

lots of them here (central europe), i don't see them often, but they can be heard stomping in gardens at night.. and they really do have lots of fleas :o)

I have no idea about all that, Lia. I just saw the picture online and thought it was adorable. lol. I have no desire to own one, though. No matter how cute they are in pictures. Do you know where they come from? I'm in Colorado and have never heard of them being around here anywhere.

I never saw a hedgehog being washed, but I know they have lots of lice and fleas, so if you have to take them in hands, washing off the fleas would be the best to do!?!

Thanks, I thought it was adorable, too.