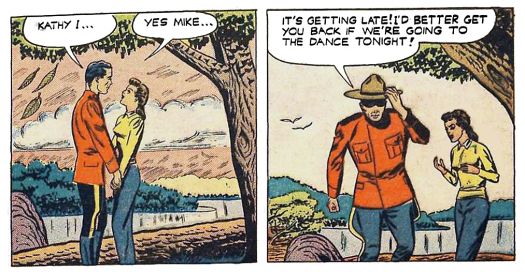 Mike remembered in the nick of time that kissing might spread the virus
Created by ammy Published 26 March 2020
Why this advertisement?

Thanks for the info Barefoot_Sharon, I really liked that story. Like your Startrek Sir Patrick too :-)) .Shirley

She dictated it to a couple-- a Mr. and Mrs. Freedman. They got the writing credit.

To Barefoot_Sharon--Did the real Mrs. Mike write the book that I have as well?

Reminds me of an old joke I heard:
Q: How do you get 50 Canadians out of a swimming pool on the hottest day of the year?
A: Say "please".

Interesting! Had no idea!

My cousin married a Canadian. They are very polite. They're not like Americans that just get down on one knee and give an ultimatum. They're more like: "Oh hey, eh. I was thinking of maybe later going to City Hall, eh? I was wondering if you want to come with me, eh?"

Fun fact: This is a work of non-fiction. The real Mrs. Mike told her story to some Hollywood types when she became widowed after 37 years of marriage and living up in Canada.

I wondered if this was from "Mrs. Mike". I have seen the movie and read the book twice. Do not remember author but still have the book somewhere.

I read this comic! It's based on the 1949 film "Mrs Mike" starring Dick Powell & Evelyn Keyes! She was expecting him to propose but he chickened out at the last minute...

I love the position of her hands/arms in the second frame. I'm not sure what she was planning, but she definitely had those plans ruined.