Kookaburra - I caught him having a laugh!! 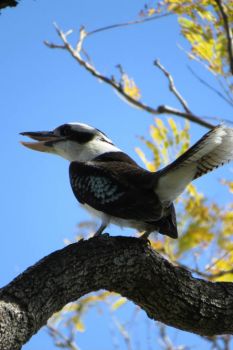 In the back garden on Friday morning.

This is a link to the Kookaburras call:
http://www.soundboard.com/sb/KooKaburra_sound_clips

Thanks for the great sound link. I thought open sounded a bit like an owl, another bunch like a pack of apes chattering, and a third seemed to say his name twice!!

That's OK Ami:))) They apparently laugh during the mating season, but other than that I have no idea:)))) Thanks - and I hope you're doing OK!!!

I guess I've been missing a lot of your pics Robyn, sorry! Love this image of yours! I wonder what it had to 'sing' about!?

Thanks Colin - they belong to the Kingfisher family - and we have about 3 varieties of them in different parts of the country !!!☺☺☺

Thanks for this, Robyn. I had no idea what a kookaburra looked or sounded like. Handsome bird and a wonderful variety of musical laughter!!! ☻☺☻

Thanks IF - yes, it's a jacaranda and they are dropping their leaves at the moment!! The Kookaburra only laughs for a short time, so it's never annoying!!

Thanks Floyd:))) The old computer sounds like it comes in handy!!

Thanks Shirley - we seem to have a resident group of them now - we hear them a lot!!

Thanks Laura - one has just had a short burst outside as I'm typing :)))

Fantastic photo, Robyn! He is laughing, for sure.

Thanks Rob, A great shot, I haven't seen or heard a Kookaburra around for a while now, I guess they'll turn up when they are ready.

Great picture of him watching you.
My new computer doesn't do the search,
so I got the old one doing the task.

By the way, is that a jacaranda tree?

Wonderful shot robryan, the colors came out great. I suppose the sound could be a bit annoying if the birds are close by and calling incessantly. But it's nice to hear at will with the link you provided, thanks.

Thanks Janet, Sally, Beekay, Marian, smllpkg, Patti, snooker & Dave. I think it may be a Blue-winged female - not sure though!! I really appreciate your comments:)))

What a great shot, Robyn!! I'd never noticed the color in the wings before either. Thanks for the fun of the call!!!

Loved to see them when we were in Oz.

I love it! And I love the calls! Thanks for the link!

"Merry, merry king of the bush is he."

When I saw this Kookaburra laughing, it made me smile Rob. Great photo.

A perfect photo of him Robyn. Love that tail! Thanks so very much!

I can never have enough of listening to the Kookaburras' sounds, Rob :)
Thank you so much for the photo and the link....they make me laugh too!