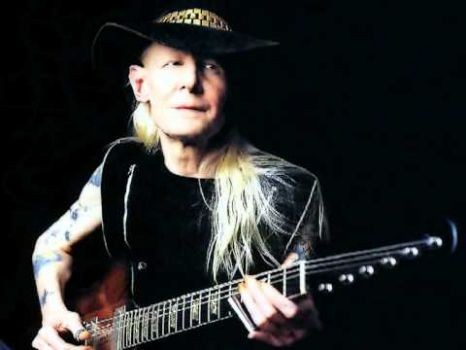 Johnny Winter was a guitar slinger from Texas. He had an album so titled, which made me wonder just what that nickname meant… ‘a guitar monster who sings lead vocals and astonishes audiences with guitarmanship’, is one definition I found. And he was astonishing. And raw. And amazing. Born on February 23, 1944, Johnny Winter was the bluesman everyone else hoped to be.

I could write a little bio, but it would be the same info you could find with a click. Johnny wasn't a man you read about... Johnny was a man you listened to. His guitar said it all.


I’m Yours and I’m Hers - https://www.youtube.com/watch?v=L3FnLwQjRQ0

At Woodstock on a 12-string - https://www.youtube.com/watch?v=M6kPQLLLYAc

No, John, you didn't annoy me. The last three Mondays have been super busy, as will the upcoming one. Didn't have time to post or comment.

Maybe you have to pee because you’re panties are backwards again.

Yolanda, to answer your question, no, I have never thought about publishing a book about my exploits into the realm boring. I have had so many unremarkable events in my life, it would take several volumes to list all of the monotony I have harvested.... much like a set of encyclopedias. Remember encyclopedias? Real books with actual paper pages that contained information? And there was no audio version available so you had to READ? I do believe that encyclopedians may have been the first people sent to the unemployment line by Steve Jobs and Bill Gates.

But since you asked, I will tell you of yet another high light of my life. I used to work for a company that had a very strict dress code. We were required to wear black slacks, white shirt and a conservative tie (a Jerry Garcia tie would result in just bread and water for lunch). Being the rebel, I decided to break free from the crowd and be, dare I say?, different. So one morning I had my usual breakfast, plain piece of burnt white toast with no butter, a cup of day old black coffee and got dressed for work. Here's the exciting part.... I put on my black slacks, my white shirt and boring tie, BUT I put my underwear on BACKWARDS! AND NOBODY NOTICED! Can you imagine my excitement? I nearly wet my pants when the boss grunted "good morning" to me. That was probably the best day of my life. Well, as you can tell, I have lived an extraordinarily exciting life... and all those roads of excitement brought me here to Jigidiland. Oh crap.... I've got to go pee.... SEE? Another exciting moment in my life... does the excitement never stop????

@rswestley I found the story of your radical paint changes so interesting I wonder if you had thought of a novel or film of the event? I I am sure this would provide many opportunities to disappear but strangely attract fame and fortune at the same time.

mpp, that is a beautiful story and I never get tired of hearing it. In fact, I have started reading this story to our dogs at bedtime so they will fall fast asleep.

Your story reminds me of a time in the early 70's (1972?) when my wife and I got tired of our 'off white' dining room and in a fit of drunken insanity we decided to add some color to the room... so we painted it 'antique white'. The excitement in the room was so thick, you could cut it with a bagel. I remember spending hours and hours sitting in our dining room watching the paint dry. Crazy I know, but it not only made our dining room "pop", it also helped solidify my place in the invisible community.

I got to see him play three times. Twice at a small venue in Houston called The Texas Opry House. One of those was a solo set all acoustic. It was his birthday and he played for about two hours. Great show!

I've told this story before, but I worked with a catering company that did a lot of the acts and festivals that came to town. I got to see Pink Floyd's full rehearsal (fortunately it didn't start till after I finished the dishes). We had the whole field to ourselves (maybe 45 people), beer, leftovers, no security...

Pink Floyd, Yes, A day on the green ( and the night before on the sidewalk waiting for the morning gate crashing for general seating) , a tribal stomp at the Berkeley Greek theater. Zappa four times. I had a car.

Physically, he had a lot against him, but we obviously don't care, do we? Such great music...

Juba - I forget who it was (lot of forgetting goin' around today) but you mentioned someone else you saw - that I didn't. Some I had a chance to see, some I didn't... you were lucky!

Vision problems came along with albinism. I saw him and his brother in the 70’s. Probably at the Memorial Auditorium in Sacramento.

"Johnny Winter was the bluesman everyone else hoped to be"? Yup, I always wanted to be a 5'3" albino with long stringy white hair and so skinny I would have to run around in the shower to get wet. Blues man yes... but better known as a social activist for short people after he was denied a ride on the "Zipper" at the Sealand State Fair. In an ongoing legal battle, Johnny Winter attempted to have the term "You must be this tall to ride this ride" stricken from the English language. And don't be fooled... Johnny Winter wasn't the one stoking that Gibson Firebird... it was the tattoos on his right arm that did all the strummin'.

The Lord giveth and the Lord Taketh away. February 23rd. Odd, we celebrate the birth of Johnny Winter and on the same day, we mourn the death of "Mad" Mike Hughes. "Mad" Mike died Saturday when a homemade rocket he was attached to launched but quickly dove to earth in the California desert, ending his life before he could prove the world really is flat. RIP Mad Mike... I will see if Johnny Winter's right arm is available to play some blues at your funeral....

Check out 'Highway 61 revisited' on Second Winter, one of my favourites.

Edgar is his younger brother.

doesnt he have a twin brother....edgar