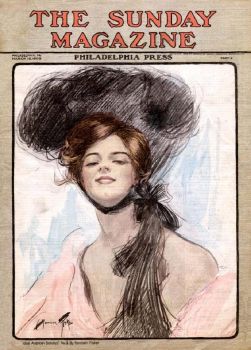 Created by cakes1947 Published 27 October 2012
Why this advertisement?

Strange how we all feel the same about it.

I agree, too! It almost looks as though the hat was an afterthought...wonder what the reasoning was behind it? Still, she is lovely, and thanks for posting, Joyce ;-)

I agree. The other pictures looked more elegant. That`s probably because this one looks to be done in mixed media. The face is beautiful, but that looks to be watercolour, like the other ones. The hat (?) and the hair coming over her shoulder look to be done in pencil or charcole. It makes the whole picture look less refined (in my eyes :) )
But I still think it`s beautiful. Thanks Cakes.

Nice but not one of my favorites from this series. Thanks for posting though, Joyce.