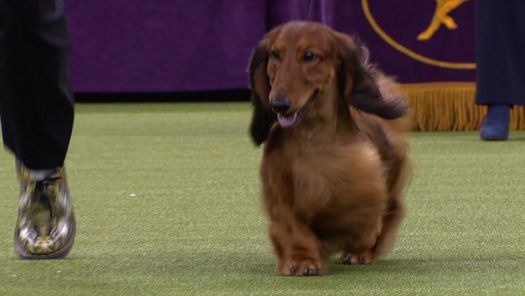 Created by carrps Published 13 February 2019
Why this advertisement?

Agreed that the Boxer was very nice, indeed. I'm just sour about the entire Non-Sporting Group getting shafted. For what it's worth, Wilma already is a Grand Champion, as were most of the Best of Breed winners. (Two of the 3 Keeshonden I bred and own, are Grands.)

Personally, I thought Wilma was the grand champion. Such a beautiful specimen of a boxer.

And the Best in Show judge was a very famous Terrier handler before he became a judge, so I was afraid he'd pick the breed he was most familiar with.

Everybody laughs when they think of doxies doing agility, but they're tough little dogs. I wouldn't want one for an enemy. :-)

Yeah, PutterDutt, that schipperke (sp?) situation was a real mess. I was really sad, because the odds were that a breed that had never won Best in Show would win last night, and, instead, it went to the breed that had the MOST wins. Wah wah.

So you know, bhelen, in Agility the dogs are grouped by heights, so the 11 year old won his height class. Congratulations to him and his owner/trainer!! When I got the Agility bug, my boy Putter was 9. It took us a while as we could only practice in class once a week. Putter ADORED Agility! When he was 11 he completed both of the first level titles, barking his delight! Some folks came up to comment on how fun he was to watch and casually asked how old he was. When I told them he was 11 they nearly fell over in shock. :o) An injury ended his Agility work, much to his sadness. He'd whine when he saw the equipment at the kennel club. (The injury did not happen while working, just a bad slip on the grass at home.)

What a precious little one! ~ We watched the dogs run the agility courses, yesterday, and HOW ADORABLE to watch each-and-everyone-of them, run the hardest that they would. It's not the big show, but it was still very exciting and so entertaining! A senior dog (age 11), who only stood 8" tall to the shoulders, came in first place! Bless their little hearts! xxoo

And so was every dog in the Non-Sporting Group!