Aerial Ethics and the Convair CV580 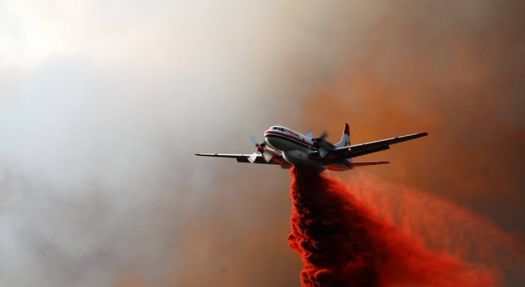 Today I enjoyed an extensive private tour of the aircraft pictured.

I had always wanted to fly air tankers, I've always loved the idea of using my skills for good... a way to make a major difference in the world (including saving lives) and still get to fly airplanes.

I had one job where a route between Beijing and Bangkok was imminent and kept thinking, "I don't want to fly sex trade tourists, I don't want to facilitate that in any way".

These guys and gals work non-stop all summer and work all over the world, from here to France and Australia....

A very cool job and a very cool plane. This one was manufactured in 1953.
Created by Mazy Published 13 June 2019
Why this advertisement?

that's true, truck. It would be a novelty for me to work in aviation for a company that treats its employees well. They also make it a point not to hire jerks since the crews spend all day every day together for 4 solid months.

Thanx, Maze - I guess I was an anonymous nobody, and morphed into an Also-ran . . .

That company has a great reputation for how they treat their employees, that's why they have so many long term ground and air crews.

you're not just an anonymous nobody! You're just an Also-ran!!!

So, what are your thoughts, Mazy? I'm just an anonymous nobody, but you have my full support!

the company provides them with life insurance... presumably no one else will. But yesterday I met pilots who'd worked for the company 40, 35, and 20 years... so, like many 'risky' jobs, the safeties in place are many.

Could be risky, dangerous, but supremely rewarding. I'd do it in a heartbeat. Too bad they don't need motorcycle riders or printers or wackos!

yeah, sounds good donit. Co use they pay for it by being on call or working for 4 months solid. No 'gone fishin' for them unless they winter in the Southern Hemisphere (or dig ice fishing).

@osersan I just might... how's 8 months' vacation grab you?

I'm going to add this comment of mine to this page too:

Juba1010 hit the nail on the head with the comment, it always feels like the cavalry have arrived when the air support shows up.

The Convair captain described it to me as "Summer Camp with aeroplanes". Just doing my job, ma'am...

The logistics are interesting. The air crew are talking to one another, the birddog pilot co-ordinates the airspace and clears each plane into 'his' airspace like an air traffic controller. The actual air traffic controllers have blocked off the entire area around the fire from anyone entering it, and hand over authority for the airspace to the birddog pilot.

The birddog's passenger is the forest service guy who co-ordinates the ground and air support, he's talking on a different frequency to the ground crew, and the two of them talk to one another so the birddog pilot knows where the FS guy wants the mud dropped.

There are several settings that can be selected by the pilot for the drop - anything from the full load to 1/6 of the load, at different levels of coverage 'thickness'. They can paint it in a line as a firebreak or dump it on a small fire as a smothering blanket. They have to adjust for the drift of the wind that will blow the mud 'off course' as it drops - like leading a target with a gun - you don't shoot at the clay pigeon, you shoot at where it's going to be by the time the bullet gets to it.

And while fires create major updrafts with the heat, those updrafts mean there is a major downdraft somewhere else... so that is a major hazard.

And it's ALL very mountainous terrain in BC. Always drop downhill!

It was, Ellen - actually it was a tour of the base as well. I met everyone (I met the Convair captain, who gave me the tour, the night before at a flying club presentation he did): the birddog crew - that's the smaller plane that scouts the fire, pilot (who determines the altitudes and direction - always downhill - for the drop) plus the forest service specialist who calls all the shots as to ground and air support), payload guy (who loads the 'mud', which is a mix of salts, mostly phosphates - which act as fertiliser after the fire - and iron oxide, to colour it red so they can see where they've dropped already), the engineers who keep these 65 year old workhorses in fine fettle, and the director of operations (who happened to be the birddog pilot that day, and was the chief pilot for 20 years, and wants me to send a resumé to the current chief pilot....). Learned all about how the operation works. Cool, cool, cool!

Must have been a fascinating tour, Mazy.

oh, you're talking about where they hibernate.

Home based at YXX for 8 months of the year, off season and annual refresher training and practice.

That's a Conair aircraft based at my airport.