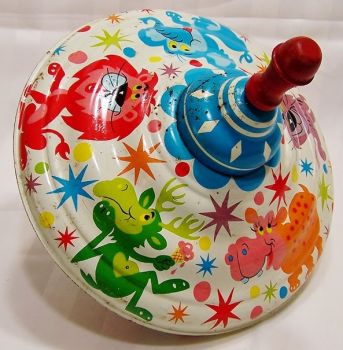 Created by Bonnietreasure Published 6 January 2016
Why this advertisement?

i remember it also. Someone in the family had one and we all played with it. It was a quieter toy than some yet had that sound. Neat.

Yes, they were beloved weren't they...and the fact that it has survived almost half a century, well-loved, and still works like, well...a top (ha-ha) speaks a lot about the quality used in manufacturing toys in the wayback. How long will the current crop of 'Elsa' dolls last, do you think?

I had a similar one when I was a child, and so did my daughter who's now nearly 30!

I, too, had one. It was multi-colored stripes. I am old enough that I feel blessed that I can even remember it!!!!!

I'm clearing out my parent's house and found this and some other vintage toys in the attic. I can vaguely remember playing with it when I was 5 or so...How long ago that was...lol!!

I had one as well but not sure what color it was - my two older sisters had it before it was passed down to me. I do remember it being striped, maybe, with red and blue. The top was wooden. TFS

I had a top, like this one, but mine was just red, in color. I can still hear the 'whistling' of it, while pumping it...to go faster and faster! Nice memory, so TFS!