Stocks and Pansies....Carnival of Flowers, Toowoomba.... 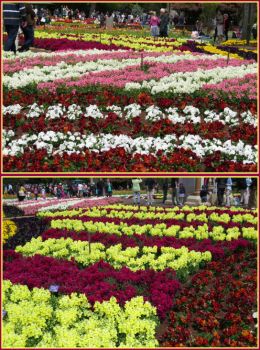 .....at the Queen's Park Garden display. The Carnival of Flowers is on for the next week and we went on Sunday.

Toowoomba is 125km west of Brisbane ( 1.5 hours drive time) on the edge of the Great Dividing Range and has a cooler climate.
Created by robryan Published 24 September 2014

Ah - thanks for explaining that Cathy - I never knew!! That makes perfect sense too:))))

Rob, thank you for telling me (us) the origin of the name. : ))
It's like the name Canada. One of the early explorers asked an indigenous guide, "What is the name of this place?" The guide replied, Kanata which means Village. The European wrote Canada in his journal. : )

Thanks Lunie - yes it's an annual event held every September, and is always popular with locals and tourists alike!!

Thanks Dave - the town really puts on a great display!!!

What a fantastic show, Robyn! I can't wait to see more of it!! The color mixes and volume of color is fantastic!

LOL, Rob we were both half right, I just checked with Des, he said we are NW of Toowoomba, I'm not good with directions, my family tell me if they turn me around twice, I'd be lost, and they are right, :)))

will take note of this event rob...is it an annual activity? will be in my priority list! i almost died too (with laura and lyndee) lol! those flowers are just like heaven to me! thanks for sharing...

It was news to me too Shirley - Jigidi does that sometimes - makes you curious:)))) I would have thought you were NE of Toowoomba Shirley, but maybe I'm map-challenged:)))) That's happened before - and the family do remind me at times:))
Helping design and create a float sounds like fun - but I bet it got difficult to come up with new ideas each year!! Thanks Shirley!

Thanks Barb - my pleasure:))

Thank you for the story of the name, Rob....it is a good one as I was wondering too. Great collage and beautiful flowers :)

I didn't know how Toowoomba got it's name, very interesting, Thanks, Rob, we live 1.5 hours drive time west of Toowoomba, so Toowoomba is in the middle of us Rob, we visit there fairly regular, I haven't been to the Carnival for a few years now, when I was much younger I helped design and create a float for "The Arabian Horse Society" each year, was a lot of fun, and the Carnival gardens are really beautiful, Toowoomba is known as the Garden City. and Queens Park Gardens are always beautiful, Thanks Rob.

Cathy said she liked he name Toowoomba - so I did a quick search for the origins of the name. The most likely story is as follows:

A third version and a widely accepted theory of the use of Toowoomba's name comes from Mrs Alford, wife of James Alford, one of the first businessmen in both Drayton and Toowoomba. It is believed that Mrs Alford asked the local Indigenous people what they called the area. They replied 'Woomba Woomba' meaning 'the springs and the water underneath.' The Alford's realised that two woombas would not be a suitable name for their house and store but by using TOO which is also a type of plural it would become Toowoomba.

It sure looked a wonderful sight Cathy!!! I'll have to look up and see how it got it's name:)))) Thanks!!

As far as the eye can see!

Stunning collage, Rob. You had a lot of "awesome" to work with here!!

It sure was Janet!! Our first time visiting during the Carnival too - and it was a real eye-opener!! Thanks!!

WOW! What a sight! That's so pretty and what a mass of flowers. Thanks and hugs, Rob. Janet

LOL!! There were sooo many people there Laura - and it was just a beautiful sight!!! Thanks!!

I think I would have gone to heaven with Laura! LOL This had to be absoutely beautiful.

I would think I had died and gone to heaven in a place like this!!