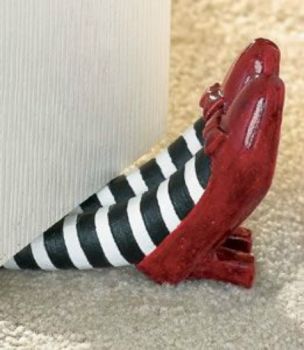 Hi everyone, dropping in for a moment. I heard the good news!!! Now the insurance company owns them. The previous owner has first dibbs on buying them back. See you all soon...Rayna

Did you hear on the news yesterday that one of the 5 pairs of ruby slippers used in the film was stolen many years ago, but finally tracked down and recovered? Said to be worth three million dollars! Yikes!

Fun to read your comments - loved that movie! My grands are afraid to watch it?!

Thanks for letting us know. I just did the smallest one. Good memories!

Posted a puzzle showing the moment the other bad witch tries to take the ruby slippers..under RaynaGrace tonight.

Final side note: In the original Frank Baum book, the shoes were silver. MGM switched the color in the movie to ruby red so they could show off their Technicolor capabilities.

Yeah but the ruby shoes were Dorothy's. So, who is holding the door?

It wasn't Dorothy but the Wicked Witch of the North (?) that got body slammed by the house. Instant recognition for me! Clever!

Ah, Toto must be from Oklahoma.

Very, very good. Poor Dorothy. She was off the mark by just a wee bit.

These would be a big hit out here in the middle of America where all things Oz are prized. Thanks for the post.

Oh, that looked like feet sticking out from under the bed to me. Good place to hide the bodies, but they would need to do a better job.