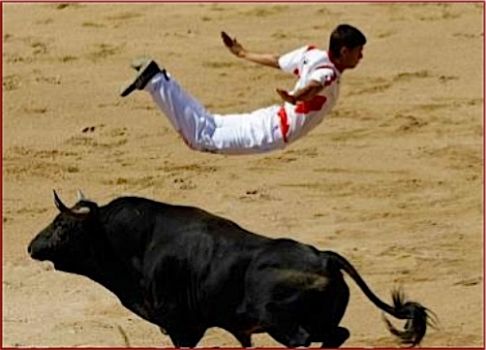 Created by JiggyBelleS Published 21 October 2012
Why this advertisement?

LOL - Chilisand! Thanks for the caption!

If I saw that bull coming at me, I would try to leap over him, but that was ridiculous! Hilarious captions were made by all! Thanks so much for all the fun!

In a fiction book I have on Atlantis, they describe bull fighting which includes vaulting and tumbling!

Mario had been enjoying a sightseeing flight when he started losing altitude. He was shocked to find himself landing in a bullfighting ring with an angry bull just waiting to see the red on his flight suit.

Mommy look, I can fly

Miracle Man (first cousin to Wonder Woman), while in Spain, visits local bull fight.
We have rare footage of Miracle on a low fly over a rather large bull in the ring. The photo made the local papers, foot line;
"Man seen flying in invisable plane. And that's a lot of Bull!"

Trouble and Frog.....I thought for a minute, with the credit card, you were going for "frequent flier miles".

See, if you hover over him like this, he will sit and curl his tail for you!

Juan Manuel had really screwed up this time. Not only had he mistaken the venue for the Swallow Dive competition, but somebody had drained the pool and left the door open from the cow byre!

"And they fly through the air with the greatest of ease,
Just like the man on the flying trapeze..."

High as a kite again . . . too much cafe au lait methinks

He should have taken away his credit card . . . that would have stopped him from running up such consider-a-bull charges

Definition of a bullfighter . . . an OXO*-moron