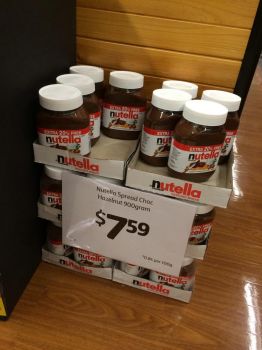 We were staying very close to Chinatown in Sydney and there was a BIG Coles supermarket next door in the underground shopping Mall. And what did we find - jars of Nutella at nearly £4 a jar! No thank you - too expensive.
But - we did buy ...
Created by Brie1648 Published 2 June 2020
Why this advertisement?

Up here in the north people have gravy with their chips. We never had that down south. Brown beefy gravy

There are foods here, in the US that are the same, It also depends on what part of the country you are from.

That is so true. Most English children were brought up with Marmite. Probably the main reason why people fall into the 'hate' category is they put too much onto their toast. It really needs just a smear otherwise it burns the mouth as its flavour is so intense.

If you have grown up on those items, you do or don;t love them.

Philistine! I take it you are not a 'love' then LOL!

I wouldn't want to ruin a perfectly good potato! LOL

And that is why that is on the label!
A jacket potato with a slab of butter and a little Marmite is also delicious. It is definitely 'love or hate'. Hot buttered toast and Marmite mmm...yummy
What a wonderful gift - your own jar of Nutella! What a kindness :o)

Some times the best presents do come in small packages. It made you happy. That is all that matters.

Nutella tastes like hazelnuts. I love this stuff but hadn't had it in about 6 or 7 years and one of the c.n.a.s that takes care of me here at the nursing home I'm in and I were talking about it last October or beginning of November and I mentioned how much I like it and how long it had been since I had had some. I didn't think any more about it after that. Come the day before Christmas she came by my room with a package in her hand with a red bow on top - yup, it was my very own jar of Nutella. I enjoyed it for almost 2 months. It was the best gift I received. Jeri

The origin of the marmite name:

Marmite is the best (British, of course) It is full of B vitamins. Vegemite is a poor substitute especially since Kraft took over.
Hadn't thought of using it as rat poison. I wonder if it works as a slug repellent?
Does anyone know why Marmite is called that?
I have never ever tried Vegemite - nah.

You'd have to be nuts already to pay this for it. Don't care for hazelnuts, myself.

No you are correct in saying marmite is far worse than vegemite.
Give me some blutwurst any day, morris.

Don't mind nutella...but if vegemite didn't taste so awful I would consider using it for rat poison...or am I thinking of marmite... ;DDD

Have to agree with, Bob. Do not care for the stuff. Still have not had vegimite. But made me think that I would much rather have black pudding (blutwurst) or haggis. Which I actually like!

Never had vegemite either.

You can repack this rubbish back in it's box and return to sender......yuck.
Vegemite is way better than this☺

I love it. Never buy it though; it wouldn't last long in the house.
Tried vegemite while in Australia ~ awful! I found it worse than poi. If my memory is correct, you mentioned you actually liked vegemite!?

Am I the only one that has not tried this?