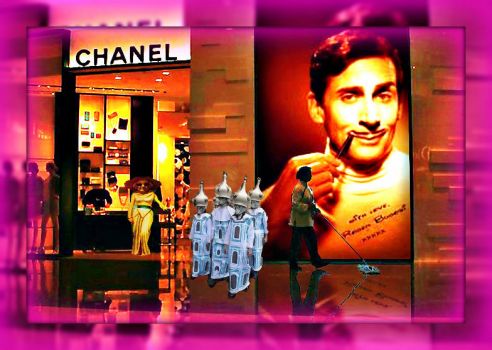 Further-Farther-Bonga today witnessed the unveiling of a brand new store, owned by the eminent playboy, Mr.Roger Bugosi.......
Sweetlittleoldgranny was the guest of honour at the opening ceremony, which was attended by
dignified dignitaries from around the world, including those eminent emissaries, the Gnob-Gnobbers from Gnob-Gnob........
Uncle Roger, unfortunately, was unable to attend, due to a 'pressing engagement' over at the house
of the recently resuscitated sisters-of-the-darn..........
Created by lelabugosi Published 20 October 2013

I am, of course, with you Hanne, as I am accused of BAD TASTE all the time here in Bugosiland. I can't imagine why!

Well, BAD TASTERS, aren't you happy that there are other places to go for people like us????

OK Gran, I'll save it for my afternoon delight

I would just like to say that Roger's Boutique is proving a huge success, attracting discerning customers WITH GOOD TASTE from around the world (especially Gnob-Gnob)........
I have taken on the part-time position of door-person (mornings only), and would strongly advise certain people here not to cross my path, as I am taking my job very seriously.......
Toodle-pip!

Out of curiosity, did the Gnob-Gnobbers purchase anything at Roger's store? They could do with a change of style.

I think SLOG looks smashing in her ensamble and am looking forward to a shopping trip if Mr RB goes Global...if not ..perhaps you can start a charter line to ferry the shoppers to Bonga Bonga.

well I got the lovely nighties as promised and I'm away to my bed to try them on, have fun lovely people

Look out this little guy is heading to the Mr.Roger Store to stock up.
http://www.jigidi.com/puzzle.php?id=9DLGUB0X

I will be off for a chat with her instanter, we always got along fine so maybe I will find something out of this world to wear at the karaoke, a Geisha outfit would be fun and I could make tea for everyone

THIS JUST IN!!!!! Cocco Cannoli has just made public her plans for her spring fashion show to be held (date not yet determined) during Bonga-Bonga's Fashion Week. Stay tuned for further updates.

Junee if you're looking for really great deals at 'Roger's' such as bogof's I would suggest you suck up to sweetlittleoldgranny. It appears that she is the door guard.

Mr. Squire I thought you of all people would appreciate small business, entrepreneurial-ship, and capitalism. God Bless Bonga-Bonga and Hip Hip Huzzah! Carry on sir!

Roger is one incorrigible cad, and we all know it. So where is any incorrigible cad to go these days, now, today, in this modern world in which we live in, except into retail? Mark 'em way up and then slash the prices! 50% off, 60% off, 70% off!!! No reasonable offer refused!!! Name your own price!!! Call me "Retail Roger" and you can toddle my pip any time during regular store hours!!! "Special Sale!" "Come On In!" "Buy 1 Get 2 Free!" (It's all quite boring, you know, yawn, but what's a playboy to do for money these days? All the rich old broads seem to have died off in Bonga-Bonga, something about the long-term effects of tadpole wine addiction. Dreadfully tedious, yawn.)

Roger could always REPENT!!! And be SAVED!!! Then we could support his new venture...until he messes up again.

Speaking a universally acclaimed truth is not discrimination.... it's a simple statement of fact .... especially when said about a Bugosi.

Discrimination??? Who talks about discrimination - but you?? We said you were slimy and a cad!!! - what's wrong with that??

Helloo admirers of good taste, and the rest of you who fail to see the beauty from behind the veil of discrimination.........Despite the slurs on my good name which have been voiced below, I shall continue in my endeavours to raise the spirits of ladies of refinement and good taste, such as the glamorous gawl-of-the-darn, through my personal attentions and also, as well through my luxury cut-price store......
(Glory-Bee, your card is in the post)
And now it only remains for me to say - "Toodle-pip" (as my pip shall NEVER be toodled by a poodle)............

I'll never look at you same either Psquirt. I seem to have misplaced my glasses. Oh Master Henry is that you. Nope just mum's antique platter on the wall.

Psquire I must admit, you have really caught me off guard with your beauteeeful sentiments. I've never seen the softer side of you. So manly yet so sweet and vulnerable. I must admit I have shed a tear or two. Could it be that history has judged you too unfairly? Perhaps you are turning over a new leaf? Only time will tell, but I for one will never look at you the same. :-)

Good morning wonderful people. I have posted a most informative puzzle that I'm sure you can all benefit from just copy and paste this link. http://www.jigidi.com/puzzle.php?id=CI1O6C0E

How good that we all have our likings! - and dislikings - my first thought about young Roger was that he was slimy - sorry Roger, but it hasn't changed! SO - gemmy and Varda let's have a qualified meeting with some good "realities" and lots of fun!! P-squirt, you are SO impressing really!!

As I gaze upon the scenes in this puzzle I try to think back upon the many scenarios of the past, but my mind turns like the sharpened vanes of a wind powered turbine, chopping my sparrow-like thoughts into bloody pieces that fall onto a growing pile of forgotten memories.

Roger is a cad and a two-timer, three-timer...!!! He had one lovely evening with me...very high-class goods...and then he took off after the Mal-Wart goods...all the while still sweet-talking me! My momma didn't raise any fools...and we intend to "fix" his toodle-pip!

Pssst Roger, when can I expect my 50% off card?

I know I've been away for a while...so why all of the animosity towards Roger? He's charming, demure, very attentive and most brave to open a store right next to Mal-wart! We must help him to defeat The evil empire before they take over the world with their bollrack pricing. Please I beg you to put your petty differences aside and shop only at Roger-mart(?) for the betterment of all mankind. Did you know that 73% of all merchandise offered at Roger-mart was produced right here in the good ole Bonga-Banga.

Sounds good, Hanne and Plumpy...we can party while we paint a few protest signs! Who else do you think we can get to "walk the line"? We might tell psquirt that Roger is cutting into his territory...and smells better, too!

Can I come, too, Hanne? I can bring what's left of my blackberry schnapps, and maybe some biscuits with fig jam. . . .

gemmy, let's go somewhere else - to a nice place!!

I, personally, will never set foot in any store owned by this cad!!! In fact, I might even arrange a protest out front!
How could you, SLOG??? You were one of the very first wimmen libbers!