Do You Know What These Are? A 165-Piece Puzzle 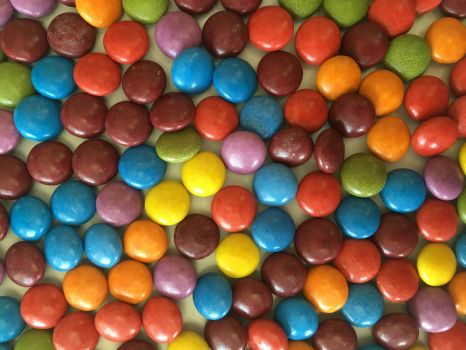 They're not m&m's, and they're not Skittles. Neither of those candies come in these colors. There's also no "m" or "s" on any one of the pieces (no, I didn't take the time to flip them all over to hide the letter). Solve this puzzle to find out what they are.

By the way, if you want to avoid "spoilers" that give you clues to the answer, don't read the comments until after you're done.
Created by ElvisBanana Published 31 July 2018
Why this advertisement?

Thanks, I needed that. Someone insulted me on Jigidi today for no reason so this more than makes up for it. And absolutely I can 'see' your Elvis do the karate arms with the banana! LOL! have a great night - day? depending on where in the world you are :)

@Mazy, I'd love to show you an ElvisBanana signature karate move! If only these jigsaw puzzles could include motion!

I'm actually trying to think of a way to create a simulation. I'll be sure to mention your name in the comments if I figure it out.

Finally, whatever I said to make your day was from the heart and well-deserved. I was simply noting that you seem to be very helpful and generous. That's just obvious to anyone who is paying attention. Sometimes it seems that even simple things like common courtesy are becoming harder to find, so I really appreciate it when I see it. So the real thanks should go to you. Well done, Mazy!

well... ok, I like that. But what I'd really LOVE would be an ElvisBanana signature karate move.

BTW you made my day, thanks.

Mazy, I would reply with the "thumbs-up" emoji, but I know from experience emojis won't work in these text fields. So instead of a digital thumbs-up, I'm sending you the psychic vibes that say "thumbs-up"!

cheers :) that's my MO, it fits well on Jigidi.

@Pussle, I'm glad you've been having fun and learning a few things. I always hope people are having a good time, life's too short to be focused on things that make us miserable!

@Mazy, thanks for your contributions. Clearly, you've been a help to Pussle. I love it when people choose to help a stranger. That's the sort of thing we need more of in this world!

@ElvisBanana - thanks very much for the link! Yeah, it looks like the American Smarties are completely unrelated to the Canadian and British ones - they just happen to have the same name.
This conversation has been a fun learning experience for me!

@Mazy - that explanation is also helpful to me. I hadn't thought of spell check, but yes, that explains things! Thanks!

@Janica51 when you say the red under Pussle's name it's probably your spell check alerting you that "Pussle" isn't a word. It won't show up in text after you post it.

And, yeah, 'course they're smarties! way better than m&ms.

Thank you Pussle, and Janica 51 for your comments. I just finished responding to a comment on the smaller version of this puzzle that indicated these are Canadian Smarties. I'm pasting below the essence of what I said in that comment. One thing to note is that the site I reference includes a comment by someone familiar with British Smarties. That person talked about the orange flavor, and was adamant that they were very different candies than the Canadian Smarties. You will find the URL to that site at the bottom of the comment.

If you're interested in seeing that article (actually, it's more like a blog), which includes a very good photo of Canadian Smarties, here's the URL:
http://www.torontomike.com/2011/03/american_smarties_vs_canadian.html

You piqued my curiosity about where Smarties are/aren't available,and I noticed that there's no mention of them being available in the USA. They have websites in the UK and Canada.

Also, I'm getting hungry just looking at the picture!!

@Janica51 - Smarties are (originally) from the UK - they were made by Rowntrees when I was a kid. Fun fact about Smarties - the orange ones are (or at least were) orange-flavoured.

Yeah they are called Smarties but I was told you can only buy them in Canada. Had some yesterday. My parents always got them for me as a Kid. That means they have been around for over 60 years . Candy covered Chocolate.