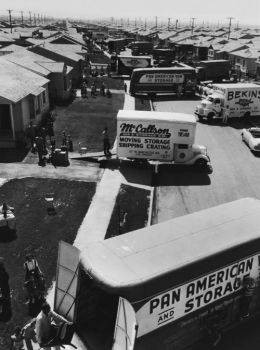 Oooooo, ekopug! Heaven on a half shell!

I had a Fisher wood stove that took 24" rounds! Absolute paradise!! Two walls of 9x3 foot double paned glass . . . French doors to a 800 square foot wrap around deck. It was so quiet you could hear the thrust of the wings of the Red Tail Hawk. No surprise visitors, you could hear them 2 miles away! My kind of living! :o)

It sounds like you have a great place, PD! I love trees too. I used to live on 40 acres in Northern California with THOUSANDS of trees . . . Douglas Fir, Madrone, Old Growth Redwoods, Second Growth Redwoods, Tan Oak. I wish I held on to that house!

Wow, ekopug. I suspected that the lack of trees WAS due to the land being farmland originally. Still, I love trees and when I bought this house of mine in 1989, there was only 1 big cedar in the back yard. That first summer I put in several kinds of pine and 1 tiny little maple which now dwarfs the house!

Cool old photo. This is the Post-WWII GI Bill in action. There are no trees because the land, most likely, was farm or ranch land prior to being developed to build this housing tract. The early 50s was when the growth of "Los Angeles" really took off. I grew up about 10 miles from Bellflower . . . in a brand new 2 bedroom 1 bath house, just like these. In the early 50s, these houses sold from $4,000 to $6,000.

Hustle up, Jerry! I can barely see you in my dust! (grin!)

FOUND IT!!! I'm at 9,233 right now. I used to be on Jigidi for hours at a stretch. Now, it's not that I'm bored, just have learned to no be quite so obsessive about it.

I know I've seen a number showing how many puzzles a person has completed, but now I can't find it, Jerry. :o(

Ellen, you have the distinct honor of being the publisher of puzzle #5000 solved by radiojerry.

I wouldn't want to live there....too much traffic! ☺

Reminds me of the lyrics of a song from maybe the 1950s......"Littel houses on a hillside, little houses made of ticky tacky". Looks like somebody exploded an Instant Suburbia bomb!

Maybe it was the grand opening, Laura.

They all had the exact same moving date? How funny!