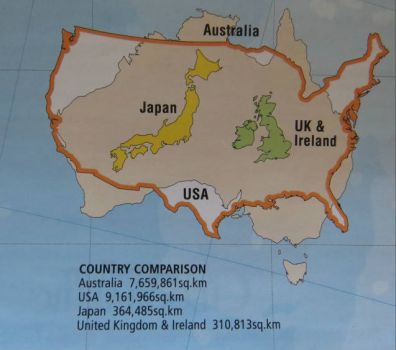 I came across this in the latest edition of Australian Geographic magazine.
The U.N. calculated - as of April 2015 - that the population of the USA was 325million - 3rd largest country, Japan - 126million - 10th largest,United Kingdom - 63million - 22nd largest and good old Australia - 23million is 52nd largest!

China and India fluctuate between 1st and 2nd most populous - at around 1.4 billion!!!

The site I visited is:
http://statisticstimes.com/population/countries-by-population.php
Created by robryan Published 13 January 2016

This is an interesting post thanks Rob, and I don't think a lot of people realize just how big ( and empty) Australia is! I enjoyed all the comments too. Hugs my friend ♥

Wow! I didn't know that about Texas and WA Chrissie:))) I was also surprised to see the sizes of OZ and the US!! Thanks :)))

Oops! At least I know there are 50 of them LOL.

And we can fit Texas into Western Australia 3.5 times... with a bit of room left over LOL.

Thanks, Rob - it's interesting how many US citizens have no clue that Oz is very nearly the same size as the 50 contiguous states. Whenever I meet a Texan I take delight in pointing out my state is nearly a million square miles big :-)

Thanks theeother - if you type in 'country size comparisons' to Google you can see lots there:))))

Sure Heidi - I understand!! This also didn't include some islands of Australia - and territories either, but just gives a general idea! Thanks :)))

It wasn't meant to include all those countries Woofer - just these 4 - and as I live Down Under I thought it was interesting as I thought the main land mass of the USA was much,much larger than Australia. We think of our country as a small one compared to lots of others! Thanks :))))

You've convinced me too, rob, although I could do with some of that snow that's falling 'up-over' :-)))

Very interesting, Rob, Thanks for this.:)

I see that Alaska and Hawaii (49th and 50th states) haven't been added to the US. That would make the US a LOT bigger.

i wonder about things like this all the time
thank you for this map!

I guess you would be Lunie - and a rather crowded dot:)) Thanks:))

Glad you enjoyed this one Barb:)) Thanks :))

That's right BK - the majority of the population lives on or near the coast - especially in the southern states, and our state - Queensland. The centre and north Western Aus. is pretty sparsely settled - and DRY!! Thanks:)))

Yes Robin but a lot of your land mass is a bit too harsh to live in. Isn't most of your population along the coastal cities?

Interesting that the USA country is bigger than the whole continent of Australia....Wow! I love digging such facts up, so thank you Rob for doing it for me :)

Guess so...we could be the dot in there...hahaha.

Thanks Dave:)))) The population figures vary a bit too - depending where you look!!! This just gives you a good idea though:)))

I got a bit of a surprise when I saw the comparison with the USA Laura - I thought you were WAY bigger:))) Thanks:))

Thanks for commenting copsmith and suredreamsalot - it's nice to see you:))))

Thanks Lunie:)) After I saw this in the mag - I Googled 'maps' and found out that you can do it with any country you like!!!

Australia is a little bit bigger than I thought it was.

You guys are pretty big, too, Robyn! I love all your opens spaces!