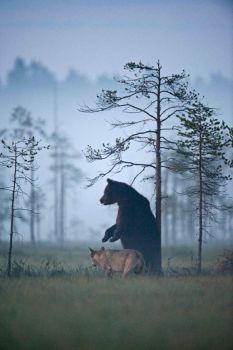 Very rarely do we catch wild animals behaving in unexpected ways, mostly because we aren’t usually traipsing around in the wilderness with a camera. Fortunately, photographer Lassi Rautiainen was doing just that, in northern Finland, when two young hunters, a brown bear and a gray wolf, crossed species lines and became companions. For at least ten days they were spotted sharing food and hanging around together; the wolf was even accepted by other bears in the area.

We tend to think nature follows very strict rules. Predators are usually solitary, and they hunt for themselves and, in some animals, their families. That’s just evolutionarily logical. Food equals survival.

It's happened before, probably way more often than we know. Other reported cases of unusual wild friendships include a lioness in Kenya who stayed with and protected her young oryx (a small antelope) prey rather than kill and eat it, and a leopard in India that returned night after night to cuddle up with a chained-up cow.

It's never clear why these unusual pairings occur, but wild animals that get separated from their mothers too early, or that are cast out from the group (like this wolf, perhaps), sometimes take odd steps as they figure out how to survive on their own. A partner of any species might simply bring comfort, a sense of safety. And if there's enough food to go around, why not break bones together?


Full article at the link. Pictures show them bringing food to each other and playing together.
Created by Mischka Published 24 July 2020

That's all right. There's plenty to keep us happy at home these days.

I'm really not a movie person. I think the last one I watched was ET! LOL

Don't believe I have seen that one.

Just to change the subject for a sec,
@Donnajames, if you've seen Somewhere In Time, would you call its ending a happy one?

DJ, I read about that docu, but knew I would cry my eyes out so I never got around to it. I cry from joy quite as much as from others' self-sacrifices.

Thanks, everybody, for the insights!

I saw a documentary on that lioness with the young oryx. The lioness almost starved herself to death because she would not leave the young for fear it would be killed by others. When the inevitable happened and the oryx was killed, the lioness adopted other orphaned animals.

...and there is often a mother in these pairings...motherly love is not rare in the animal kingdom

Not only that, but actual scientists, behaviorists, sometimes got so wrapped up in their focus that they believed people "don't feel anything."

I once gave a public PowerPoint talk on unusual animal friendships. I think everyone got weepy. And to think that actual scientists once believed that animals "don't feel anything."

Thanks for the unique insight into northern Finland, Fiona ♥♥♫☼