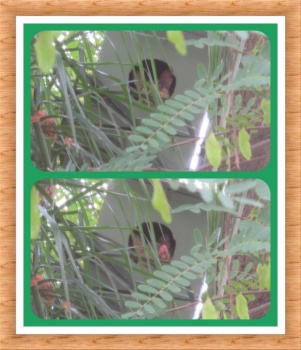 Julian built this possum box quite a while ago and we have had a large possum in it for a while now, as we hear her thump onto the roof at night as she goes off to find food, but we were thrilled to see a little face peeking out one morning. Not the greatest photos as they were taken from our bedroom window, looking through the fly screen and through the tree branches. He/she should have been asleep, as they are nocturnal, but while his mum was sleeping, he was having a look at the world.
Created by jan42ful Published 23 March 2022
Why this advertisement?

Thanks Shirley, no they can't get into our roof, just crash about on it!!
Hugs my friend. ♥♥

A little cutie, I do like these furry animals although I know they can be very naughty and sometime get into ceilings of homes, so nice for you to see him/her grow up, Thanks, Janet.

Yes, it was JayneH and it was also the first night of my visit to AU!! Had never even heard of these animals before and I knew nothing about them!!! Would have enjoyed them much more if we went a few days into my stay and had some info :-))

Thanks Marina, there must be a mum too, but we never see her, just hear her crash onto the roof at night. Hugs. ♥

A small darling! Aren't you lucky to have at least one of these sweet creatures!.

Jayne, they are not anything to be scared of. ♥

I'm guessing that they loved the cat food. They would be very used to humans. Hugs my friend.♥♥

Ooo Hooo, alliebono!! Surrounded by a multitude of red eyes in the dark to me is extremely disconcerting. Just the visualization gives chills!!

We fed them cat food and they loved it - there were loads of red eyes around us in pitch darkness and we only had one small torch and the flash of my camera! I enjoyed it, even if it got a bit scary at one point. More torches next time lol xx

Thanks Barb, we were thrilled to see him/her! Hugs dear friend. ♥☺♥

Thanks Allie, there are two types of common possums in Australia, Ringtails and Brushtails. There are others that live in rain forests, but you probably saw one of the common types. No, they don't catch fish. They eat blossoms, flowers and catch insects too. Hugs my friend. ♥♥

Yes Jill, if you read my comment to Val below, I do know about the situation in NZ. Thanks and hugs. ♥

So very cute, Janet. I'm happy to see your little cuties so thanks for sharing them. Hugs to you my friend ☺♥♥

What a cute little darling!! How lovely to have wildlife in yr garden. Do they eat fish? Be careful for yr goldfish pond!!!
I saw possums in Melbourne - there is a park there that has many and I was taken over to feed them one night. I wonder if they are the same. :-) tfs

That’s cool for you to see a little one. Seems such a foreign idea for us Kiwis, as you know, we are always trying to get rid of them.

Thanks so much Sissel, hugs my friend. ♥♥

Yes I know Val that our Aussie possums were introduced into New Zealand for the fur trade, but they love your climate and have become huge and breed like crazy. It never works to put animals into other places where they never were and have no predators.
Thanks and hugs my friend. ♥♥♥

Thanks so much for sharing Janet. Hugs :-)))

Janet so cute, our daughter used to have one come inside at night for a treat in the Bonogin Forest. Over here they are considered a pest, we have just been delivered a thing to nail on trees to see if they have come back they will chew it, we then supposed to ring a number, some one has put one on the lamp post outside our house on a fairly busy street. Our one is still sitting on the bench Hugs my friend. ♥♥♥

Redina, we love nature and Julian made a box for micro bats, one for the possum and one tiny birds called Pardalotes. Your possum probably already has somewhere to go each night. Thanks and hugs. ♥

Why make a box for a possum? That sounds really strange to me. I saw a possom a night or two ago walking on our cement block fence. Should I make a box for him??

Thanks Lena, hugs to you. ♥

Thank you,Jan for the picture 😍

Thanks Gail, we have a few around here, they prefer to live in towns and cities than out in the bush! hugs ♥

Thanks, Janet. I saw a possum walking on the lawn across the street from us in broad daylight a few years ago.

Nev we've had one using the box for quite a while now, so we presume it's the mother of this little one. I can't quite imagine having one living in a roll-a-door! Thanks and hugs my friend. ♥♥♥

Thanks Jacki, I thought you would enjoy seeing him. hugs ♥

Thanks Jayne, he's about the size of a small cat, not a kitten, a bit bigger. The mother would be the size of a large cat. Hugs. ♥

Janet, you and Julian are to be commended on this initiative.
When my parents lived in the mountains they had a possum living in their garage roll-a-door. The way the door was installed wouldn't allow us to get him out, so we simply left him there. ♥♥♥

Aawww! Never seen a possum before. He kinda looks like a bat - big ears, snout. About how big is it - compared to say, an adult cat? Thanks for sharing him/her, Janet! :-))