Life in the "Comp'ny House" 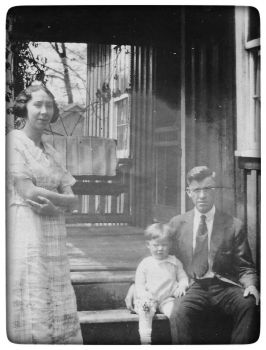 My grandparents, Ben and Martha Keller, with their firstborn, Dwight, aged two, on the porch of their "Comp'ny House", in Putney, West Virginia. Baby Margaret was sleeping inside. It was 1922.

The coal companies, before the birth of the United Mine Workers union, essentially owned the men who slaved in the guts of the Appalachian hollows and hills.
The companies built complete towns near the mouths of their mines. They brought in (their) law officers, the doctor, the dentist, the preacher, the schoolteacher for their schoolhouse, and built a funeral parlour for the undertaker.
They built the church, the depot, and a "movie house".

The "Comp'ny Store", which took only "scrip"--the single exchange currency that was honoured there-was owned and operated by the company. The store prices were exorbitant, and the company-owned train and track, which operated on a strict and limited schedule, were the only means the miners and their families had to get out to a public market. This effectively allowed the company to recoup the bulk of the miners' paycheck.

Moreover, the company built all the houses and "privvies" in the town. They owned the land. Nobody else was allowed to erect a dwelling.

In short, the company owned the miners and their families. It was, in fact, a form of slavery. To keep miners working, the company would bring in trainloads of hired thugs to intimidate, beat up, and summarily evict any unhappy striking workers from "their" homes.

Has the word "company" become tiresome to you yet? Indeed, it was tiresome to the miners and their families, too.

Today, the town site is detected only by a wooden weather-beaten sign listing in handpainted letters and numerals the names of the men who died in the Putney Mines.
The gravestones lie in damaged disarray beneath the overgrown vegetation, and scattered daffodils, the remains of a mine wife's garden, bloom along the faint deer and bear trails that crisscross the acreage.

From the mountainside, the remains of the old tipple brood over the once-bustling, muddy little village.
Created by Becca48 Published 23 April 2020
Why this advertisement?

dbnc2, yes. There were countless injuries and mine-related illnesses that unceasingly plagued the men who survived their working years.
My grandfather had a broken ankle and, in his sixties, spent a year in the tuberculosis sanitarium, courtesy of the mines, and for which he was finally awarded Black Lung benefits.
One of the names painted on that wooden memorial is that of my grandmother's older brother, who was killed when a 2-ton slab of slate fell on him. It was a difficult life.
They had a story to tell!

I believe that my maternal great grandparents were Sooners, and had a farm in Oklahoma before their daughter married my grandfather. Also, great grampa was a country doctor who died in the flu epidemic of 1918 at an elderly age. I have a framed picture of his family before my grandmother was born. I have trouble posting puzzles unless I go to my daughters house on WiFi. I’ll put it on my to do list Lol. :-)

Juba1010, You, then, know the story.
Would love to see a photo puzzle of your grandparents. ♥️
I, too, am a daughter of "Depression Children". Waste was a sin forever in our home, and for me, still is.
For my maternal Grandparents Keller, the Depression was difficult, but Grandpa had freed his family from the Company's ownership by the mid-'twenties.
Although still "goin' down" for the Coal Operators, he had purchased enough land to farm and feed his family, and built a small, modest home for his wife and children, who eventually numbered seven. Their flock of chickens, one cow and mule, and the annual hog provided food year round.
So, like your grandparents, they, with much hard work and "scrimping", did not suffer during the depression.
On the other hand, my paternal grandparents and their children, desperately poor and trapped in the city, had it much harder.

My grandfather was a rough neck and foreman on drilling rigs. My mom lived all over the south as a child. Grandma was a school teacher. They never went hungry during the depression, but remembers grandma giving men sandwiches when they would ask for work.

My grandparents lived in a "company house" outside of Freer, Texas. You'll need a detailed map to find it, out in the oil field.

Juba1010, Yes. It was. Although he remained a coal miner throughout his working life, and paid for it with his health, my grandfather was one of the few who had the foresight, courage, and determination that enabled him to break away from the shackles of economic slavery.

St Peter don’t call me ‘cause I can’t go. I owe my soul to the company store.