13 Wild, Little-Known Quirks In Languages From Around The World - Ubang 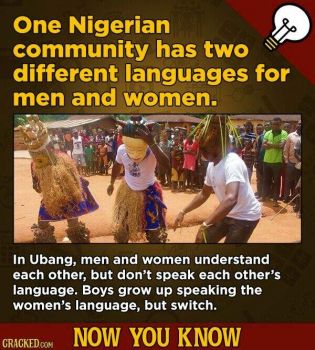 From the "Pictofacts" corner of the comedy website Cracked.
Created by Mischka Published 12 July 2021

A lot of movies and TV shows don't pass that test.

Is anyone here familiar with the Bechdel Test?

It is a measure of the realism of women in movies written by men.

The rules now known as the Bechdel test first appeared in 1985 in Alison Bechdel's comic strip "Dykes to Watch Out For." In a strip titled "The Rule", two women discuss seeing a film and one woman explains that she goes to a movie only if it satisfies the following requirements:

1. The movie has to have at least two women in it,
2. who talk to each other,
3. about something other than a man.

The gal who promotes this choice of films says that she hasn't seen a movie since "Alien" (but it WAS 1985, long before "Thelma and Louise.")

You're a hoot, Gulliver!

And we rarely understand mansplaining. It seems to be mostly testosterone and no common sense.

And I love it...they never know what we are talking about!

Looks like we're all on the same page; that was my first thought too.