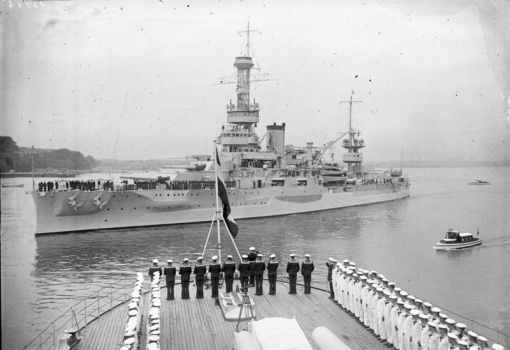 American Battleships vist Germany for the first time since the War!
For the first time since the end of the war, a squadron consisting of the American battleships "Arkansas", "Florida" and "Utah" arrived in Kiel under the command of Admiral Cluverzius. To greet them, a 21 gun salute was offered by the German vessels "Hessen" and "Schleswig Holstein." Photo from "Schleswig Holstein" of the large American flag ship "Arkansas" during her arrival in Kiel harbor. In the foreground a parade formation of German Navy sailors.
Created by dragonandbear Published 6 February 2015

An interesting photo of a barely remembered and rather mournful episode. Arkansas and Florida has been part of the Grand Fleet's Sixth Battle Squadron, and Schleswig-Holstein, although a pre-dreadnought, had been part of the High Seas Fleet. Both of the American battleships had been coal-fired then, and now looked very different. Arkansas's two funnels had been trunked into one when she was converted to oil-firing; her after cage mast had been replaced by a pole mast. For Florida and Utah it was their last hurrah as battleships. Naval disarmament treaties would send Florida to the breakers, and turn Utah into a radio-controlled target vessel. Schleswig-Holstein would also wind up as a target, first for British bombers and then for the Soviet Navy. Her grave is in the Gulf of Finland. Arkansas and Utah would find graves in the Pacific.