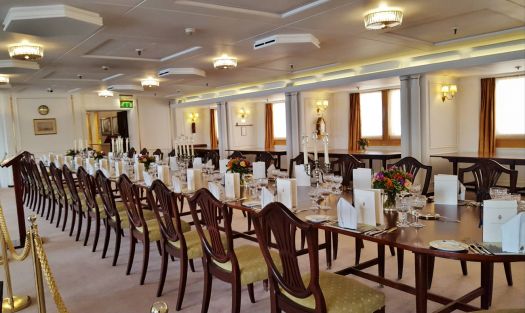 There's a difference between being mean and "canny wi' yer cash" ;)

Mean and generous people are met with in all nationalities - by and large, I would say that Scots tend to be more open and welcoming, generous with time, help and opinions than the average; but many of us don't see the reason for paying extra for something just because it's got a better name, or looks slightly prettier if its functionality is as good.

@smallclanger I think the crew were pretty much like all Her Majesty's servants, expected to serve Queen and country in whatever capacity they were needed in a weird sort of doing it out of duty/grateful for the privilege/all the time keeping a stiff upper lip combination. And turning a blind eye when Philip was on his bachelor tour ;)

That was ID not idea, stupid autocorrect!

@Highlander_40 When we were in Scotland we couldn't fathom out where that stereotype came from. We found people to be anything but mean. Unlike down here, no one asked to see our English Heritage passes. Even at Edinburgh castle they just took our word for it. Here they want to see every person's pass, inspect the expiry date, and sometimes even see additional photo idea to make sure you haven't borrowed someone else's membership for the day. I think you Scots get a bad rap for no reason.

The crew did not live so well; very little rough weather sailing.

Hate to perpetuate the myth(?) about the scots, but it's always been the price that's put me off! :D

The virtual tour for your Mum sounds wonderful! We did similar things for my Mum in the National Museum & Castle and she was tickled pink, so I can imagine the reaction of your Mum to getting to visit the Royal Yacht!

Hi Tom. It's expensive, but well worth a visit. I took a lot of pictures so I could show my Mum. It was something she'd have loved to do, but sadly her health was bad and by the time the yatch was open she was housebound. So I made her a little virtual tour. What made me laugh was the yatch was also used as a floating museum/ storage space for many of the more dubious presents the Queen was given during her travels. All the "what on earth do we do with that" stuff got left/displayed around the yatch :)

Thanks Janet, I've seen the Britannia from the outside hundreds of times; never from the inside! I wouldn't have minded being a fly on the wall during some of the banquets that would have taken place in here over the years. ;)