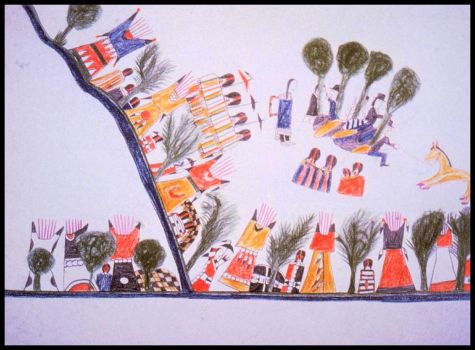 In 1875, Howling Wolf (1849-1947) was among a group of Southern Cheyenne captured and transported to imprisonment in the old Spanish fort in St. Augustine, Florida, renamed Fort Marion by the U.S. Army. While at Fort Marion, Howling Wolf became proficient in what came to be termed Ledger Art. Today he is the probably the most prominent of the original ledger artists whose work survives.

There is a long tradition of artwork among the native peoples of the Plains, who originally painted on animal hides – particularly buffalo hides. When buffalo became scarce after eradication programs encouraged by the US federal government, Plains artists began painting and drawing on paper, canvas, and muslin. In the mid 19th century, an increasing supply of ledger books and other paper came from Europeans, along with pencils, fountain pens, crayons, and watercolor paints. The ledger books used by storekeepers to record their sales were one of the earliest sources of paper for warrior-artists, and their art – done on any sort of paper – has come to be called “ledger art.” The subject matter soon expanded to include all of Plains daily and ritual life.

The “Medicine Lodge Treaty” commonly refers to the three treaties signed in October 1867 between the U.S. government and the Great Plains tribes that had settled in Medicine Lodge on the Kansas prairie, an area sacred to those tribes. The Medicine Lodge Treaty was intended to end conflicts and bring peace to the region, relocating the tribes to reservations in Indian Territory (what is now Oklahoma) and away from European settlers.

Three treaties were signed between the U.S. and five tribes at Medicine Lodge. The Comanche, Kiowa, Kiowa-Apache, Cheyenne and Arapahoe tribes ceded familiar lands and hunting grounds, in exchange for allotted reservation lands. They also unknowingly gave up their freedom to leave the reservation or practice their religion and traditions. The object was to get the Indians to give up their traditional ways and become “civilized.” The government would provide rations, clothing, housing and schools. In exchange, the Indian would become a farmer, stay on the reservation, and stop attacking whites.

As with other treaties, the Medicine Lodge Treaty was a failure. The treaty was so complicated that most of the chiefs who signed it didn’t realize its implications. The chiefs who signed the treaty didn’t represent all the Indians. And, although Congress set up the terms of the treaty, they never appropriated the rations, clothing and housing spelled out in the treaty.